Women in, and out of, a pandemic workforce

The economic turmoil caused by the COVID-19 pandemic has devastated the lives of countless Americans. Unfortunately, the economic consequences of the pandemic have not been felt equally across all demographic groups. According to the National Women’s Law Center (NWLC) and the Bureau of Labor Statistics’ employment report, women accounted for 100% of the job loss that occurred in December of 2020. As of February 1, 2021, women had lost approximately 5.4 million jobs due to the pandemic, 1 million more lost jobs than men. Inequities caused by the pandemic continue among those fortunate enough to still be employed. According to a survey conducted by McKinsey & Company, women with children under the age of ten were ten percentage points more likely to consider dropping out of the workforce in comparison to men. Mothers, senior-level women, and black women were also more likely to express feeling exhausted, burned out, and pressured to work more at work throughout the course of the pandemic. Additionally, women reported having a harder time paying bills and mortgages than men while also reporting a larger income decrease than men. The economic recession caused by COVID-19 has only exacerbated the existing gender gap between men and women in the workforce, generating greater inequality at every level. 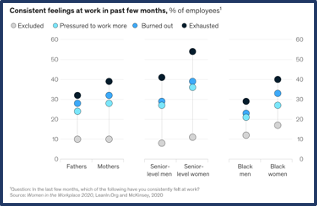 Arguably the main reason women have experienced greater job loss than men during the pandemic is due to different career types between men and women. Of the jobs lost due to economic closures, the majority have been low-wage, part-time, service, sales, and self-employed occupations.

An opinion piece from The Wall Street Journal finds that in 2007, men accounted for 55% of the workforce that clocked more than 35 hours a week, and researchers Judy Dey and Catherine Hill find that ten years after graduation, only 61% of women work full-time compared to 81% of men. These statistics illustrate that women are significantly more likely to be employed in part-time work, a type of work hit hardest by the pandemic. One reason women may be steered towards this type of work is because of their additional role in the “invisible workforce” or “care economy” within the home. In “When Mom and Dad Share It All”, Lisa Belkin writes that in the average household, women work an average of 31 hours per week on household responsibilities compared to men’s mere 14 hours per week. The two-to-one housework difference expands to a five-to-one childcare difference. The pressure to act as the primary homemaker has extended from the earliest years of American history to the present-day. Though women have made significant strides in terms of the division of labor, the pandemic has halted this progress. Nearly 60 millionchildren and teens have experienced some sort of school closure or partial closure in the last year. Thus, many households had no choice but to have a parent leave the workforce in order to care for the children now constantly at home. 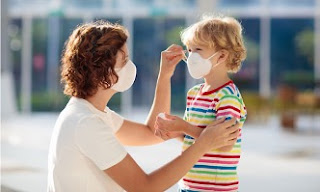 A recent KFF survey finds that 51% of women with young children who quit a job during the pandemic did so because their child’s daycare or school closed. Additionally, 70% of part-time working mothers reported taking unpaid sick leave because their child’s daycare or school closed. Twelve percent of women have also reported taking on new caregiving responsibilities due to the pandemic. These results may help to explain why many women are experiencing heightened stress and exhaustion from their work in both the visible and invisible economies. Societal pressures towards homemaking can encourage women to choose part-time over full-time work, thus leading them to experience some of the highest consequences in a pandemic economy.
A significant number of women have lost their main source of income due to the pandemic. Some researchers have found that this job loss, reduction of hours, and unpaid time off have widened the already existing raw gender pay gap. Prior to the pandemic, women made approximately 82 cents for every dollar made by a man. New research finds that women laid off during the pandemic made approximately 79 cents for every dollar made by a man and now have lost this source of income. Women who experienced a pay cut rather than a layoff experienced larger pay gaps, making just 80 cents for every dollar made by a man. Data from the Pew Research Center finds that women were five percentage points more likely than men to struggle to pay bills, two percentage points more likely to struggle to pay rent or their mortgage, and three percentage points more likely to struggle to pay for medical care during the pandemic. Women were also ten percentage points more likely to receive government assistance during the last year. The existing raw gender pay gap has harmed the finances of men and women unequally during the pandemic. The pandemic has widened the raw gender pay gap for some working women. Other women lack the resources to stay afloat during an economic recession due to the intersection of unequal and gendered pay and job selection as discussed above.

Already treated unequally in the workforce, women, and especially mothers and part-time workers, have disproportionately felt and dealt with the effects of the recession caused by the COVID-19 pandemic. By understanding the invisible workforce and gender pay inequities, we can better understand why women have been hit the hardest. By gaining this understanding, we can hopefully move to address the gendered issues in the workforce in order to create a more fair and equitable society.