NCAA Weight Rooms and the Question of Title IX/Inequality

During NCAA’s March Madness tournament and a little over a week ago, Sedona Prince, an NCAA women’s collegiate basketball player from The University of Oregon, posted a viral video of the women’s weight room provided for by the NCAA in comparison to the men’s weight room in San Antonio. 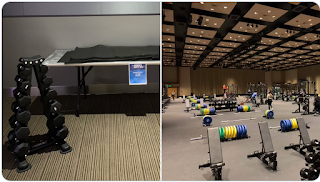 Clearly, the women’s weight room consisted of yoga mats and a single dumbbell rack; meanwhile, the men’s weight room included a variety of weights, machines, dumbbells, and exercise racks. In response to this glaring mistreatment of the women’s basketball teams by the NCAA, NCAA’s vice president of women’s basketball Lynn Holzman released a statement which mentioned that the limited amenity access for the women’s teams would have typically been available, but as a result of “limited space…the original plan was to expand the workout area once additional space was available.” Following this press release by Holzman, numerous individuals and participating teams refuted Holzman’s rationale and showed (through photos and videos) that additional space surrounding the women's facilities was available. In the following days, NCAA President Mark Emmert was quoted as saying that “the NCAA will continue to aggressively address material and impactful differences between the Division I Men’s and Women’s Basketball Championships…while many of the operational issues identified have been resolved, we must continue to make sure we are doing all we can to support gender equity in sports.” While many view this treatment between men’s and women’s basketball programs by the NCAA as an economic issue, or that NCAA Tournament financing should be appropriated to men’s and women’s teams based on their revenue shares, these recent events point to a historically relevant problem - Title IX and the issue of inequality in education and sports.

In review, Title IX is a federal civil rights statute which was instituted in 1972 to ensure that “no person in the United States shall, based on sex, be excluded from participation in, be denied the benefits of, or be subjected to discrimination under any education program or activity receiving Federal financial assistance.” In short, Title IX protects individuals and students from discrimination based on sex and is applicable to federally funded or financed educational and sporting institutions. More specifically, according to Cecilia Townes, a contributor at Forbes, “Title IX requires college institutions (among other entities) to provide equitable access and resources to its men and women who choose to participate in college athletics. While this doesn’t mean that schools have to provide an equal amount of scholarships or spend the same amount of money on men’s and women’s sports, it does mean that there cannot be disproportionate access and support for men’s and women’s sports.” Since 1972, Title IX has been, for the most part, a constructive social-political federal statute that has promoted an unapparelled level of equality between the sexes – especially through improving the parity of support for all collegiate sports teams. Because of this, Elizabeth A. Sharrow, author of “Sex Segregation as Policy Problem: A Gendered Policy Paradox” is quoted as saying that a “majority of average Americans…express increasingly high levels of support for the law as applied to athletics.” However, while Sharrow dictates unanimous public support for the many benefits of Title IX, she also expresses skepticism by saying “the policy remains unevenly implemented across athletic departments such that men and boys persistently enjoy greater athletic participation opportunities, the political battle towards achieving equality should focus on better enforcing the policy as currently designed.” Sharrow’s skepticism illuminates another problem as per the enforcement of Title IX’s policies – in practice, and according to federal law, any educational and sporting institution that receives federal financing and assistance is inherently subjected to compliance with Title IX’s policies. But the question still remains, is the NCAA (who receives monetary financing from a large number of member schools and universities) subject to Title IX policies and statutes? According to the federal court case NCAA v. Smith in 1999, Supreme Court Justice Ginsburg concluded that “the Association’s receipt of dues demonstrates that it indirectly benefits from the federal assistance afforded its members, which without more, is insufficient to trigger Title IX coverage.” Upon the analysis of NCAA v. Smith, two things can be inferred. First, the NCAA is not, according to federal law, responsible for any implicit biases, prejudices, or acts of discrimination against women and women’s sports teams. Second, despite many of the benefits that Title IX has contributed to the collegiate sports world, there is still significant disparity and inequalities between women’s and men’s sports teams.

The disparity in workout equipment, funding, and support provided to the men’s and women’s sports teams at the Division I NCAA March Madness Tournament can be explained by the continued inefficiencies of Title IX, in addition to the long-standing inequalities between men and women in present-day society. Federally supported statutes like Title IX that enable private institutions like the NCAA to discriminate (through loopholes) against women’s athletic teams is eminent of the bigger inequality problem. Simply recognizing the inequitable treatment of men’s and women’s workout facilities and associated amenities by the NCAA may not provide a suitable and sustainable solution to the inequality issue as a whole, nor in the case of the NCAA. So, what can be done? Well, the issue could be fixed at the federal level. First, as effective as Title IX has been for the last fifty some-odd years, there could still be room for improvement. Fixing loopholes that exclude private and nonprofit organizations (who still receive implicit funding from the government) from being subject to anti-discrimination policies, like the NCAA, could be a good place to start. Second, the question of inequality is not about instituting equal outcomes among the sexes, it is about simply providing equal levels of opportunity; therefore, when an organization (like the NCAA) is found culpable of treating men and women unequally, sufficient consequences may need to be enacted, because short-term public relations issues are not suitable solutions for fixing the issue of inequality.
Posted by Spencer Manning at 5:02 PM