NCAA Dropping the Ball on Gender Equality in Basketball

Gender discrimination in sports is a hotly debated topic at both the college and professional levels for a variety of reasons. Women’s teams are consistently given less media coverage, fewer resources, and less encouragement to participate in athletics. Despite the pledge to support equality, the organizations that sponsor sporting events do not appear to value female athletes in the same way as they do male athletes, something that was glaringly apparent during the NCAA basketball tournament.

Many of the policies that regulate gender and sports originated in Title IX. Title IX was one of the first policies that established that both men and women deserved access to equal opportunities in education. Since sports are a quintessential part of the American college system Title IX was quickly tied into athletics. At the time of Title IX’s passage, women had to fight for the right to play their sport. Women emphasized their female bodies as they protested for women to be allowed to play on teams and receive school support. Biological sex was immediately brought into the debate as politicians, schools, and athletes considered whether women had the same abilities as men in sports and how equality would be measured. This focus on biological sex resulted in rhetoric that differentiated the “female athletes” from the regular “athletes,” or their male counterparts.

Although Title IX successfully integrated women into the educational sphere with men, it continued to segregate sports by sex. Even though it helped bring greater equity to the resources available to women including equal scholarship funds and numbers of teams, the creation of women’s teams perpetuated the idea that men have physical dominance over women and that women would be unable to compete at the same level as men.

How does the NCAA come into play?

One of the biggest controversies in women’s sports in past weeks has been the handling of the NCAA basketball tournaments. The NCAA is a nonprofit organization that sponsors college athletics throughout the country. While the NCAA does not enforce Title IX it requires that the schools involved have gender equity plans. The players in the NCAA are not paid and the expectation is that equal resources are allocated to the men’s and women’s teams. Some of the implications of this are that there are equal numbers of men and women’s teams at universities and that these teams have equal funding. However, this is not always the reality of the situation.

This year the NCAA men's and women’s March Madness tournaments were played in two different cities at the same time due to COVID-19. Extra precautions were in place to help protect players from COVID-19 and efforts were made to create a sort of bubble. However, the differences between the facilities and resources that men and women’s teams were given were shocking. One of the female players’ tweets went viral showing an understocked weight room and lack of space to workout. This was a stark comparison to the fully decked-out men’s weight room. 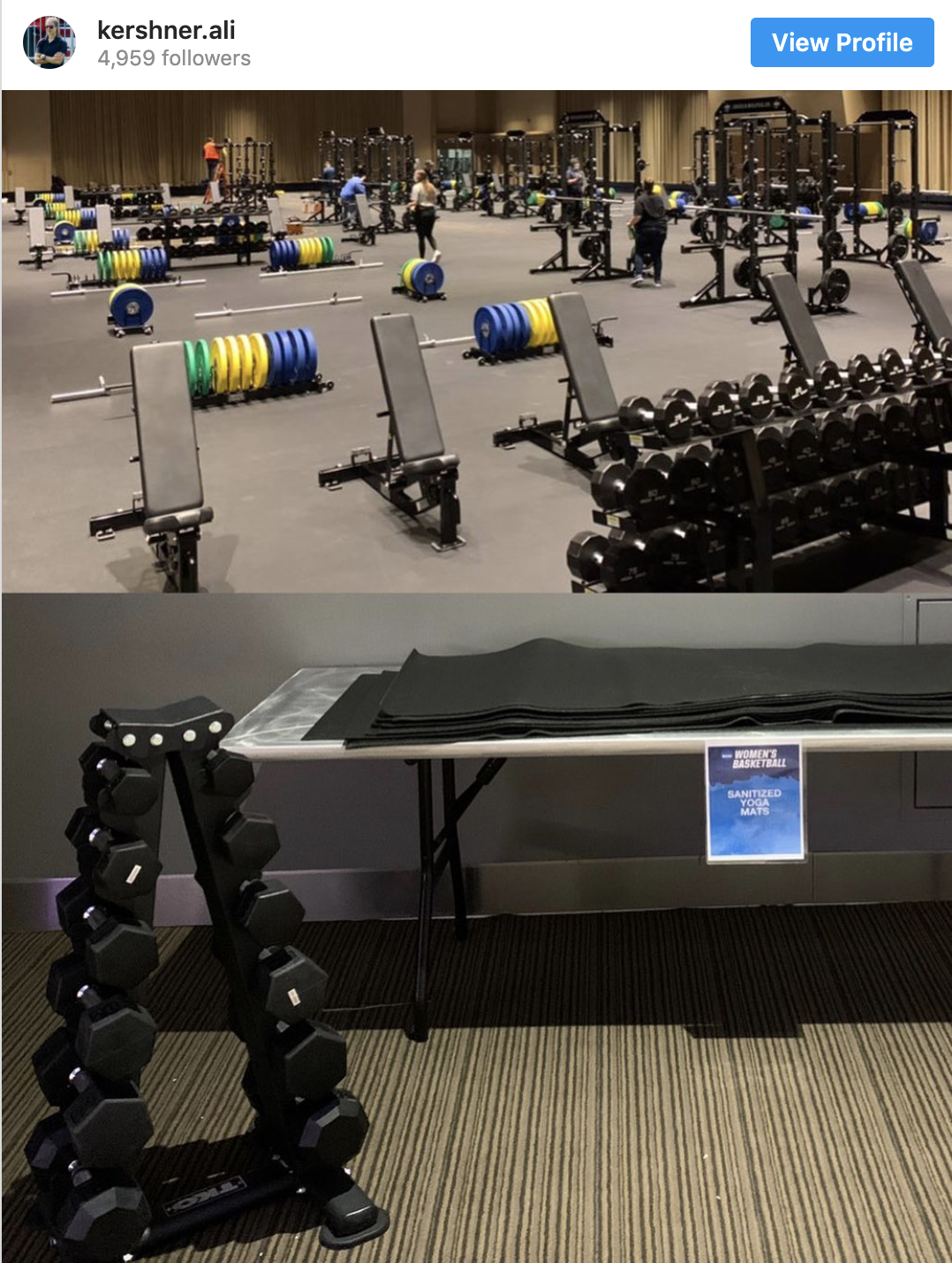 The differences did not end there though. Photos later revealed the difference in the size of swag bags given to female players, the quality of food, and the lack of accurate COVID-19 testing. Female players were outraged by the clear lack of planning and thought given to their tournament and many took to social media with their grievances where their posts went viral. Millions of people were able to view and comment on the obvious inequity between men’s and women’s basketball.

In response to the criticism, the NCAA offered an apology for the lack of planning and consideration for female players, but this did not make up for the shortsightedness in supporting female athletes. Georgia Tech women's basketball coach Nell Fortner commented, “Thank you for using the three biggest weeks of your organization's year to expose exactly how you feel about women’s basketball--an afterthought.” 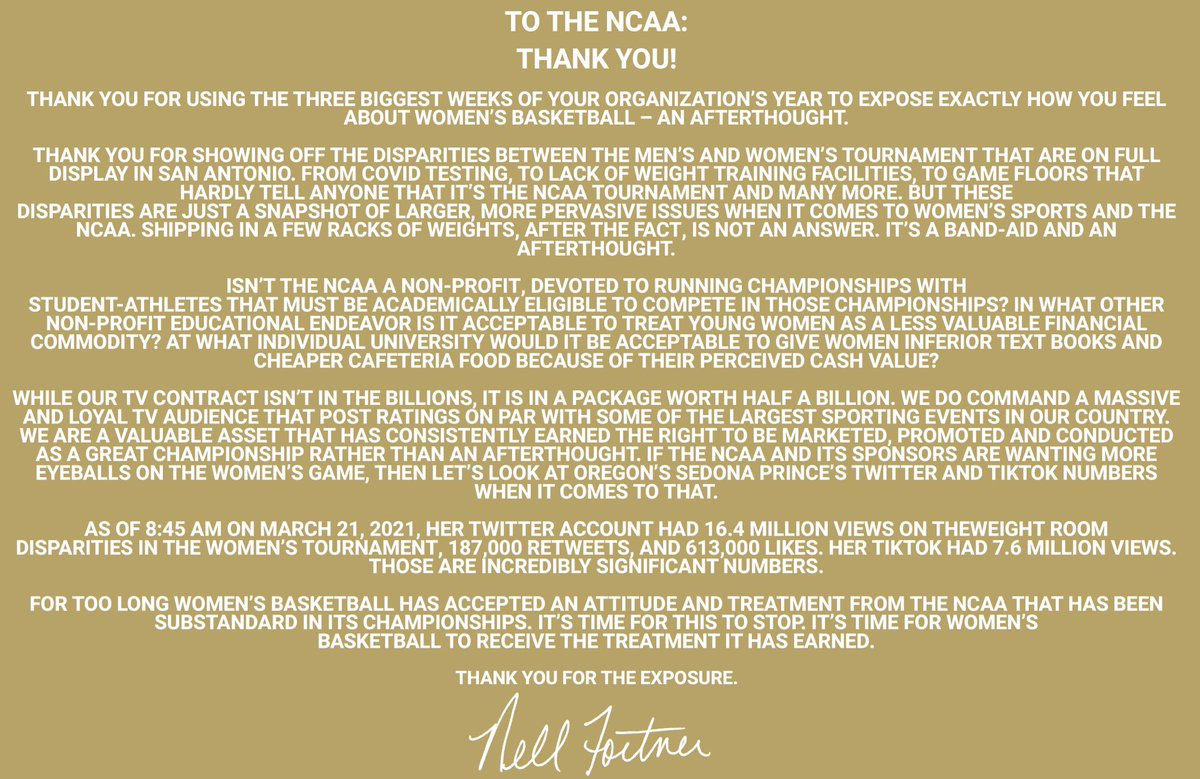 These discrepancies at the NCAA tournament highlighted only some of the visible inequities in women’s sports. Sharrow, an academic who has written extensively on gender and athletics wrote “the absence of routine media coverage sends a troubling message that women’s athletics are less exciting, less competitive, and less worthy of resources than their male counterparts.” Because women receive less time on the air they have lower viewership which in turn means they make less money. This subliminal messaging has an impact on female athletes and their ability to succeed in their careers as professional athletes. Making a career out of basketball is significantly less plausible when wages are low, the average salary being $75 thousand per year. This is in contrast to NBA players who make an average salary of $7 million. Furthermore, these athletes are not given the same validation for their athletic abilities in spite of being equally qualified.

There is no clear answer to how women can gain equal footing with men in sports. There have been many suggestions however including increasing the percentage of WNBA revenue that is paid to its players, increasing media coverage of women’s sports, and coordinating events with men’s teams to ensure equal treatment. However, it is clear that systematic change will be necessary to change the culture of sports in America.

Posted by Elizabeth Johnson at 5:30 PM