Late afternoon on March 27, 2021, the Salt Lake Tribune published an article describing the experiences of several conservative female candidates with David Robinson, the unofficial communications director for the Salt Lake County Republican Party. Candidates ranging from a single mom running for county recorder to primary candidates in the 2020 gubernatorial and congressional races reported name-calling, comments about physical appearance, and political threats. Laurie Stringham, the Republican candidate for Salt Lake County Council who reported Robinson’s ‘wh---” comment above, recalled Robinson telling her during that conversation that he would ensure she was never elected and would “ruin her.”

Republicans in Utah brought varied responses to the allegations against Robinson and the Tribune’s report. The night before the Tribune published their article, Scott Miller, Salt Lake County GOP Chair, shared an aggressive letter via the party’s email account claiming there may be special interests who wanted to “cancel” Miller and Robinson. He referred to some of the women interviewed by the Tribune as “sore losers” that wanted to prevent him from becoming the state party chair. In contrast, Utah’s Republican Governor and Lt. Governor released a statement that boldly denounced Miller’s email and gave strong support to the women accusing Robinson of misconduct.

Despite the encouraging voices of female and male conservative leaders, the Republican party has and continues to face gender disparities in candidates and elected officials. Recent political science research has helped determine what contributes to and can be done to encourage more conservative women to engage politically. The strategies that appeal to female aspirants differ greatly from those that push men to run. In a survey of “ordinary” people, or those who are less-wealthy and educated, Melody Crowder-Meyer of Davidson College found that higher levels of political ambition in women are linked to encouragement from personal and political sources; both of these sources are more impactful upon women’s political ambition than men’s. The figures below illustrate this impact. When Crowder-Meyer measured support from personal and political sources, a woman’s marital and family status, race, or political party could not effectively predict her desire to run for office. In contrast, being married and having children positively influenced a man’s political ambition. 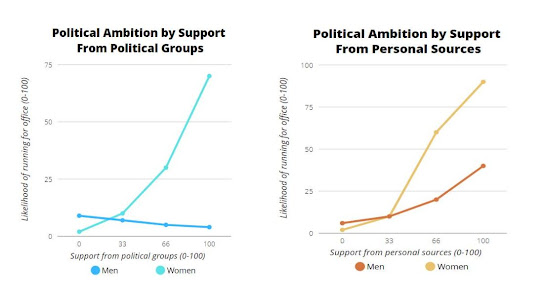 This finding indicates that women tend to be more impacted by the opinions of their family, friends, and political connections than men. As such, the support and resources from these relationships directed at their campaign may be vital to their political ambition and willingness to act on it. In another study, Crowder-Meyer found that local Republican party chairs were more likely to use recruitment strategies that did not appeal to women, potentially exacerbating the psychological difference in motivating men and women to run for office.

Though the Salt Lake Republican party effectively recruited numerous women to run in the 2020 election, other literature focused on intra-party elections investigates how conservative women may be uniquely disadvantaged. In 2020, researchers from a Utah university analyzed large collections of survey data on Republicans’ vote choice related to the femininity or masculinity of candidates, both male and female. They determined that during intra-party local elections, Republicans viewed more-feminine candidates less favorably, regardless of the candidate’s sex. Because women are more likely to express themselves and their policies in feminine ways, they may continue to face subliminal, unintentional gender biases and barriers to winning elections.

These barriers described by recent research appeared evident throughout Salt Lake County Republican women’s experiences with Robinson. After her conversation with Robinson, Laurie Stringham called Miller, saying she was “sobbing into the phone” and asking if Robinson was really going to stop helping her campaign. Other women remarked that Robinson wouldn’t share campaign resources with them unless they catered to his specific policy preferences. Although Miller told Stringham that Robinson’s threats had no actual merit, he also said she needed to have “thick skin” and continue to work with Robinson if she wanted to win.

Women rely on encouragement and resources more than men when considering running for office, so the same stoic toughness that allows male candidates to persevere may not be sufficient for female candidates. When faced with threats from a de-facto party official, these women may have felt the foundation supporting their candidacy disappear, leaving them to either man up or become a “sore loser.”  Men whom Robinson allegedly also spoke harshly to may not have been as affected by his remarks. Considering the subliminal bias towards masculinity within the Republican party, when officials like Robinson and Miller harass and speak without consequences, conservative female candidates may be doubly disadvantaged, potentially decreasing their desires to run for and obtain political office.

Crowder-Meyer’s research also suggests that the increase of organizations and resources for aspiring women may have contributed to the large increases in female candidates in 2017 and 2018. If the Utah Republican party wants to support current and future female candidates, they may need to consider ensuring threat-proof resources while intermittently condemning harassment and the condoning of harassment. Facing backlash across social media for his harassing and degrading comments, Robinson was relieved of his duties. Miller also resigned as county party chair and emailed a local news station to share that he does not tolerate sexual harassment. If they so choose, the party and its elected officials’ actions in the hours following the Tribune’s report could become a springboard for policies and practices that encourage women to run for office.

Figures are based on similar graphs provided in Crowder-Meyer's research.

Posted by Michaela Bevan at 9:03 PM