Because Childcare Wasn't Enough—Women, the Wage Gap, and Eldercare 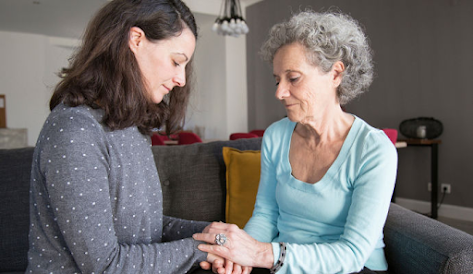 Research into the gender wage gap and underrepresentation of women in the workforce typically notes that women are the primary caretakers for children but overlooks another type of dependent—the elderly.
The Wage Gap and Childcare

Much of the difference in wages has been attributed to women working fewer overall hours. A college-educated woman can earn more than most of her male peers, but having dependents typically prevents this. A study conducted by American Association for University Women showed that 40 percent of female graduates who became mothers were working part-time or out of work entirely within a decade. The same study found that this was true for only 2 percent of fathers.

Two-thirds of all informal caregivers for the elderly are female, with care for parents typically falling to the eldest daughter. Even when men are partial caregivers, women still spend 50 percent more time proving care than their male counterparts.

Some women claim that with enough planning, women can have children and then a fulfilling career, but eldercare tends to happen later in life, and frequently comes as more of a surprise and a direct conflict with a career. Besides the inability to plan, eldercare comes with a number of other issues that childcare does not, including emotional burdens.

Watching the deterioration of a parent, who needs more care as time goes on is significantly different than watching children grow and become more independent. Women caring for their parents also receive less societal support, there are no baby showers, and family leave isn’t as common as traditional maternity leave.

The physical, emotional, and time-related burdens of eldercare can lead to women reducing hours, passing on promotions, and even quitting or retiring completely.

The related loss in income, which is approximately $40,000 higher than for a man, comes out of the caregiver's own retirement savings. Working reduced hours or retiring early means that these women have much lower pensions. The estimated total loss in wages and social security for the average caretaker is $324,044. On top of all this, eldercare has high direct costs, from medical bills to the obvious costs of another person in the home.

Because women also live longer than men, what little these women have saved is not enough, and they end up becoming a burden for their own daughters, in a never-ending cycle.

Between the aging population in America and issues like COVID-19, eldercare is becoming a much more common issue for women. It can compound with childcare to lead to “sandwiched” women who are caught between caring for parents and children, it can affect women who planned to be childless for their career at either a specific time, or for their whole life, and regardless of other circumstances, it can lead to these same caregivers aging into poverty, so they can spend the only time in their lives when they aren't responsible for caring for someone else, unable to care for themselves.
Posted by Tkarnegie at 10:08 PM