New light continues to be shed on the unequal and, quite frankly, astonishing male to female ratio in political offices of the United States. Although women make up 50.4% of the U.S population (World Bank 2015), they only hold 19.4% of political seats in the government (Inter-Parliamentary Union 1 Nov 2016). Let’s take a moment to put this statistic into perspective. African countries like Zimbabwe, Uganda, Ethiopia, Senegal, Rwanda all report that women make up at least 30% of their government representatives, with Rwanda having the largest percent of female representation in the world, 63.8%. Israel, Iraq, Afghanistan also report larger representation equality between genders than the United States. ((Inter-Parliamentary Union 1 Nov 2016). This is to say nothing of fellow world superpowers like China, France, Germany, United Kingdom, that each have larger numbers of female representation than the United States.
Female representation in politics is an important demographic in any country, especially when half of the population is comprised of women, as is the case in the United States. Citizen interests are different from one gender to another and diverse representatives are elected to represent the diverse interests of all citizens. Women in political office will look out for policies, legislation, and causes that are quintessential to the quality of life of American women. Therefore, equal representation should be a top priority. However, the statistics we see above leave us to wonder, how is it possible that the United States lags so incredibly far behind?
The answer lies in the analysis of the extensive path to political office. This path is broken down into categories and is often referred to as “The Pipeline to Political Office”. In the United States, the percent of men and women citizens starts at approximately 50/50. As individuals move from the “eligible” category to “recruits” and “candidates”, and then eventually to the category of elected representatives, the number of females progressively dwindles to a staggering 80/20 male to female ratio. While there are many factors along the pipeline that contribute to this dwindling ratio, eligibility, being the first step, demands special attention. 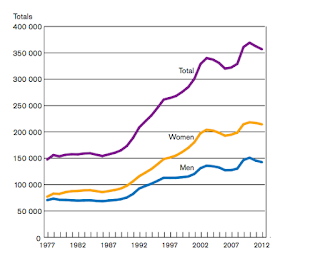 One basic qualification of political office is degree in higher education. If less women graduate from college, there will inevitably be less women elected to office because their lack of a higher education renders them ineligible to run. As we look into the higher education and political representation statistics in Sweden, we find a possible correlation between higher
education reform and a more equal representation. Sweden experienced extreme higher education reform when they passed the Higher Education Act of 1977. This act, among other things, unified higher education in the hopes that they would create equality in education and give all people, from a diversity of social backgrounds, equal access to a college education. The passage of the Higher Education Act resulted in a giant leap in female graduate rates. In the mid-1960’s, 35% of Swedish graduates were female, compared to 60% just three decades later, in the 1990’s (Statistical Yearbook of Sweden 1945-1981). The rates of women enrolled in Swedish-equivalent college courses also jumped ahead of men after 1977 and has continued to rise, soaring higher and higher above male enrollment rates (Higher Education in Sweden 2013 Status Report). Looking today at Sweden’s demographics for female political representation, we see they are the fifth highest in the world with women comprising an impressive 43.6% of government representation (Inter-Parliamentary Union 1 Nov 2016).

Looking at the percentages of college graduates in the United States from 1940 to the 1990’s, we see a gaping disparity between male and female graduates from the 1960’s to about 1990 when women finally began to close the gap and ultimately jump ahead of male graduate rates in the early 2000’s. 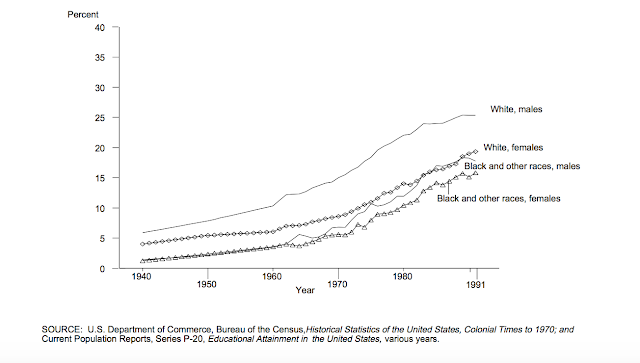 Comparing the U.S to Sweden, we see that Sweden passed reform to secure and encourage higher education for all citizens regardless of gender or other demographics in 1977 which was followed by an immediate increase in female college students and graduates, while the U.S finally closed the gap in the late 1990’s. Practically speaking, women who were first impacted by the education reform in 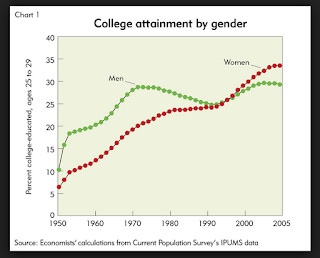 Sweden, most likely graduated in the late 80’s and these college graduates would now be at the age and experience level that they have been elected to political seats in Sweden. If higher education trends in Sweden continue, and no other changes occur that influence representation, we can assume that representation in Sweden will continue to equalize and even more women will be elected to office. Since the United States is about 20 years behind Sweden in bridging the gender gap in higher education rates, and has significantly lower female representation rates, we could argue that education rates have some effect on the demographics of elected representation.
Public figures have recently encouraged a greater emphasis on higher education for women. Michelle Obama, among others, has been a powerful force in encouraging education for girls throughout the world, but especially here in the United States. She also started the Reach Higher Initiative which encourages students to complete a four-year university degree post-high school graduation. Her initiative supports President Obama’s “North Star” goal to make America the country with the world’s highest proportion of college graduates by the year 2020 (The Edvocate 2016).
If higher education for American women becomes the “norm” as opposed to an unnecessary, or dispensable achievement, I am convinced that it will increase numbers of female representation in U.S politics, like we’ve seen in Sweden. In addition, the quality of our homes will increase as these mothers raise the next generation. No longer should a woman’s education be more flexible than a man’s. Education should not be emphasized for one person over another, especially when it comes to gender. As we increase the completion of higher education, rigid gender stereotypes, especially in regards to political representation, will start breaking at the seams.

Posted by Lexi Crandall at 10:48 PM No comments: