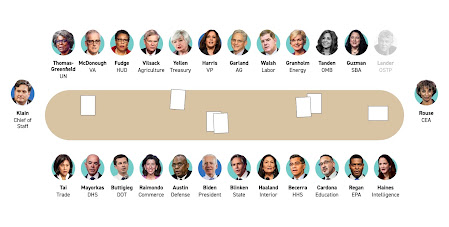 In the past, the members of an administration’s cabinet have often been nominated and confirmed to their position without general public’s awareness, and then proceeded to fulfill their duties without much amateur attention. Even Americans with political proclivities are most likely drawn to the more dramatic displays of partisan in-fighting and above-the-fold current events. Notwithstanding a lack of acute observation from their constiuency, the cabinet assignments result in many a movement within the inner machinations of American policy and procedure, and have potential to greatly effect the residual outcomes of a presidency. President Joe Biden’s final cabinet member was confirmed just last week, Labor Secretary Marty Walsh. With the collision of the unparalleled diversity of the cabinet and a global pandemic that has caused unceasing economic and personal suffering in the country, President Biden’s picks are under unique scrutiny. While all of his cabinet members are notable individuals of impressive experience and often intellectual prestige, several seem poised to make particular impact. It is this pairing of rare representation and critical need that not only distinguishes this cabinet from past administrations’ but demands a certain attention to how the members influence the country through descriptive, substantive, and symbolic representation.

We see in nearly each of his appointees the power of these forms of representation. The new Secretary of Housing and Urban Development Marcia Fudge was the first female and Black representative of her Cleveland district now directing her attention to the challenges of urban development across the nation. Her experience in the House, as an attorney, and as a woman of color give her a set of learned skills that equip her in ways different than a counterpart of a different background would possess. As per the concept of descriptive representation, her presence as a black woman in the proceedings of the executive branch of the United States (home to many black women of urban communities) adds to the credibility of those processes. Similarly, Avril Haines is the first woman to be Director of National Intelligence. While deputy CIA director and deputy national security advisor, Haines has spent much of her career understanding and creating policy surrounding torture and drone strikes. With her expertise in the field and the identity of her gender, she represents not one but two demographics that are necessary for complete representation at this particular White House table.

Substantive representation is illustrated in the work we hope to see wrought by Miguel Cardona. Until becoming Secretary of Education, he was an education professional in the state of Connecticut, where he worked as an elementary teacher, principal, and assistant superintendent. He has earned his stripes as an educator and is consequently armed with the experience necessary to lead in the safe reopening of schools as the country seeks to regain normalcy. His decisions will be informed with practical knowledge and from first-hand accounts of success in the classroom. The Secretary of Health and Human Services Xavier Becerra is Latino like Cardona, serving in the position after 25 years on the House Ways and Means Committee and as a member of one of the populations hardest hit by the pandemic. One of his primary roles will be to manage Covid-19 relief, and decisions that one hopes will be positively influenced by his awareness of fellow Latinx Americans, as he did when he helped pass the Affordable Care Act through Congress.

Symbolic representation has been the topic of much conversation surrounding newly-confirmed Secretary of the Interior Deb Haaland. She is the first Native American to serve in the position, which oversees Bureau of Indian Affairs, natural resources, and national parks. While her policy positions push her farther to the political left as compared to the other members of the cabinet and the president himself, Secretary Haaland’s historical and meaningful position is an inflection of the Biden administration’s attempt to create a diversified national leadership and consequently embody the entirety of the population. Her presence in this specific role is a step towards righting the wrongs and straightening the crookedness of the room in which the country has dwelt for too long. Our Secretary of Homeland Security Alejandro Mayorkas joins the ranks of symbolic leadership as a Cuban American. During Obama’s tenure he was influential in the implementation of DACA and served as a director of Customs and Immigration, after being nominated as a US attorney in California (a notably immigration-heavy state). His familiarity with immigration policy and procedure in addition to his personal experience combines to demonstrate a purer form of representation in yet another area of government that has been afflicted by the coronavirus.

Because Biden’s picks reflect the diversity of our country while maintaining the prowess and competency these positions demand, the current cabinet appointments are the best kind of display of political theory: representation of all kinds. With symbolic representation in Secretary Haaland’s efforts to protect her ancestors’ lands, substantive representation in an elementary educator’s efforts that will impact every grade school in the country, and descriptive representation from Secretaries Fudge, Haines, Haaland, and several other women, we are poised to have an improved simulacrum of these United States. While it remains to be seen if their work will meet the high expectations of both political opponents and allies, it is a powerful image to see such diversity fill the seats of this preeminent decision-making body.

Posted by Elizabeth Sorensen at 8:59 AM