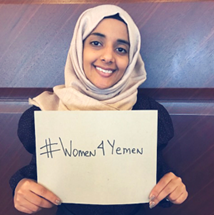 The civil war in Yemen, a country on the Southwestern edge of the Arabian Peninsula, is cited by many as the worst humanitarian crisis in the modern age, and possibly the worst in all of history. While most

Westerners are probably generally aware of a crisis in some Middle Eastern nation, the true extent of the horrors the Yemeni people experience on a regular basis are, broadly speaking, not well understood.

The Yemeni civil war has been ongoing since 2014, when Houthi rebels joined forces with the disgraced president Ali Abdullah Saleh to swiftly capture Sana’a, the capital city, ousting the internationally recognized president Abdrabbah Mansur Hadi. Hadi then appealed to United States ally Saudi Arabia to the north, and over the last 6 years a coalition led by Saudi Arabia using American weapons has been attempting to win back control for Hadi.

Given the support that the United States continues to give to the Saudi coalition, it is important for us to become aware of what our tax money is used for and the consequences of our support. In Yemen, terrorist tactics by the Houthis – including civilian targeted bombing and hostage taking – makes it difficult to effectively fight them without causing immense harm to the people of Yemen, and the most harm is caused to women.

As such, we should talk about the nature of womanhood in Yemen. The theory of gender socialization suggests that through the structures of a society, the individual growing up in that society learns how to act within expected gender norms and chooses to what degree they wish to conform with those norms. In interactions with other members of the society, that individual makes gendered judgments about others they observe in the same way that gendered judgments are made of them, continuing the process of socialization.

To understand this process, think about the gendered expectations that the society you grew up in placed on you and to what degree you have conformed with those expectations.

In my own experience, as a white boy growing up in a New York Mormon household, I felt an expectation to get a good education for the purposes of a future well-paying job to support my wife and kids, go on a mission to prove my religious devotion, and generally have self-reliant skills like I learned in Boy Scouts. I learned to value those things because I was taught them in church and at home, but I have also failed to accomplish most of those things because of my own personal gender preferences. By living this failed version of the perfect man I grew up picturing, I present to my nieces and nephews, and anybody else who I might influence, a version of the gender roles I learned, filtered by my experiences and preferences. Just as the behavior of the people I saw in childhood and adolescence informed my views of gender, my behavior will inform the gender views of children who see me. Your own experience likely followed this same general path, with whatever nuances that comes from your own individualism.

When we look at the experience of women in Yemen, then, we need to understand how the different aspects of Yemeni society will inform this process of gender socialization, and how that process has been changed by vicious civil war.

First, the process of socialization in Yemen outside of war. As a majority Muslim nation, religion plays a central role, reinforcing a binary where men are the breadwinners and leaders, while women are subservient and take care of the home. This coincides with structures that keep men in power, making it difficult for women to prove themselves as capable of more. In Yemen, these structures can be traced back to the Imamate, a patriarchal lineage of authoritarians of whom the Houthis see themselves as spiritual descendants. So, during times of peace, gender socialization produces a society of women who serve their husbands and avoid formal work.

War proves a complication to this simplistic gender socialization narrative. With higher numbers of men dying and the home coming under direct and constant danger, responsibility falls onto the women of Yemen to maintain a social structure. During war, the home is the only safe place remaining to children, so mothers become the primary agents of socialization. In turn, children learn from their mothers that women protect their family above all else and gain those expectations for their future families.

Men are the predominant casualties of war, and in Yemen, hundreds of thousands of men have died from direct military attacks and indirect starvation and sickness from a lack of safe work. As such, women have had to fill in the societal roles of those men. While this is promising in terms of long term implications about changing gender norms, the addition of expectations without taking away others means the Yemeni single mother has too much demanded of her.

So we see how processes of gender socialization have placed women at the forefront of dealing with the structural problems that face Yemen today. Women typically take the brunt of societal change and turbulence, and the constant war that threatens Yemen today represents the ultimate form of a society in chaos. Only through peace can these impossible demands be lifted from them, so that society can heal and progress, leading towards a brighter future.