American mayors: where are the women?

While women’s representation in government has increased since Jeannette Rankin (R-Montana) became the first woman elected to serve in Congress in 1916, women are still drastically underrepresented in American politics. In fact, there is a plethora of nonprofits and political action committees whose main goal is to get more women into office. Much research has been done on this issue, so before getting into the specific problem of US mayors, here are 3 important things that research has to teach us about women’s underrepresentation in American government today:

1. Women are underrepresented at all levels of government.
We all know that the U.S. has never had a female president (though perhaps that will change in 2016). Other statistics surrounding women’s underrepresentation in US politics are less well known. Women make under 20% of Congress as it stands today. Across the nation, only 24.5% of state legislators are women. In America’s entire history, only 37 women have been state governors. Finally, only 18.4% of mayors in American cities with populations over 30,000 are women. Scholars debate many possible reasons why women are underrepresented in government, and one of these is that…

2. Women candidates face gender barriers.
Women who run for office win at the same rates as men, but women don’t often run. When do women choose to run for any office, they face gender stereotypes and perception issues. Some research suggests that negative stereotypes (see anecdotal evidence of such stereotypes here here and here) results in a baseline voting preference for men. These consequences may be especially acute for women seeking executive offices, because stereotypically male characteristics are seen as necessary for higher office. So, stereotypes about women’s leadership abilities may lead to a preference for male characteristics at a higher office. Yet despite the fact that underrepresentation exists at all levels of government and women may face greater challenges in seeking executive office…

3. Most of the research into underrepresentation focuses on federal legislative offices.
The majority of current research into women’s candidacies, the consequences of negative gender stereotypes, and other important factors that may affect women’s underrepresentation, focuses on the Senate and House of Representatives while less attention is paid to state legislatures and city councils. Furthermore, little research investigates executive positions, such as presidential, gubernatorial, or mayoral seats, though these are important venues for women’s representative equality. So, research on women’s underrepresentation falls short due to lack of scholarship at the intersection of executive offices and local elections.

I chose to try to fill this gap by examining California mayoral elections to determine whether women mayoral candidates were winning more often in small or large cities.

There were a variety of reasons why I suspected that there might be a difference between small and large cities in their rates of women mayors. Small cities might have less formal, and thus inherently more biased recruiting practices. Large cities might give candidates less opportunities to speak with voters face-to-face, which limits the way women candidates can cut through gendered media coverage. Additionally, larger cities tend to lean liberal and women win more often in liberal districts. The list of possible reasons for a discrepancy can go on and on, so let’s get into the results.

Using a dataset that detailed mayoral races in 161 California cities, roughly ranging in population from 3,000 to 3 million, I tested to see whether population affected the likelihood of a woman candidate winning. My data enabled me to control for the culture, history, and partisanship of different cities, and also allowed me to look at the effect of incumbency on a candidate’s chance of success. 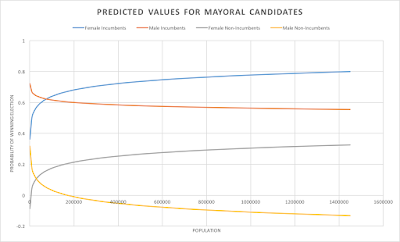 This conclusion has a clear implication: women should run in bigger cities. How exciting! Women, head to the urban jungle! But wait, wait, before we can get too excited, this research needs to be replicated. Data from states other than California should be examined to see if the trend for women doing better and men doing worse in large cities worse holds true. Additionally, further research is needed to determine what is actually causing this trend. Is it just that both women and large cities tend to lean liberal, so they are a match made in heaven? Or are women somehow being penalized in small cities? What challenges are men facing in large cities? Finding the answers to these questions will require additional research.