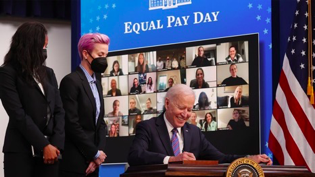 Gender income inequality has been an insidious problem in most modern societies. On average, women make $0.82 for every dollar that a man makes. To recognize this inequality, March 24th was marked National Equal Pay Day. March 24th symbolizes how far into 2021 women need to work in order to earn the same amount that men earned in the previous year. The recognition of this issue has resulted in a call to action from politicians, female athletes, and celebrities alike.

On March 24th President Biden posted several graphics and pictures regarding the discrepancy in pay between men and women. One such Instagram post was followed with the caption, “Equal pay for equal work is common sense – and it’s long overdue. As president, I’m committed to closing the gap once and for all.” These words echo the desires of many American women, but can it be done? With the proper recognition and attention from people such as the President of the United States, can the pay gap finally be resolved? Despite the attention that the issue of inequality has gained in the last several years, there has been little change in the pay gap between men and women. If we are a country that prides itself on equality and justice for all, why can’t we fix this problem? The solution for this issue is far more complicated than giving women a $0.20 raise.

What the data shows

In 2007, Judy Goldberg Day and Catherine Hill published research that illustrates the complexity of the gender pay gap. Among other variables, Day and Hill considered:

1. The weekly earnings of men and women

2. The undergraduate institutions where men and women studied

3. The gender composition of different majors of study, such as psychology or mathematics. 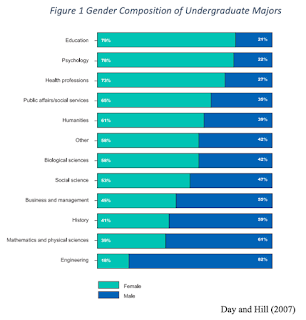 From the data, the authors were able to note that women disproportionately participate in majors that lead to lower paying jobs or accept part-time work, despite attending similar universities and outperforming men academically. The graph to the right illustrates the gender segregation that is prevalent in undergraduate major programs. This sort of gender division may have lasting consequences on networking, negotiation skills taught to men versus women, and hard skills taught to the two groups.

The deep divide in fields of study is not isolated to just the university. Women typically choose occupations in fields that are already dominated by women, such as education, social work, or clerical positions. According to the data, by choosing lower paying occupations, the gender pay gap is already established just one year after college graduation. This means it is not simply the result of a sexist boss, but rather the result of different social norms between men and women.

A possible explanation for the differences in career paths between men and women are the gender stereotypes of femininity and masculinity that plague society. Political Scientists Grace Khunou and Roshini Pillay argue that professions seen as “caring professions,” such as nursing, social work, and childcare are seen as feminine, while analytical and powerful careers are reserved for the men. These stereotypes have lasted decades and still influence career decision-making.

Another interesting and important aspect of the gender pay gap are the traditional gender expectations that a woman is to raise the children while the husband provides for the family. Data show that in 2020, 15.51 million women were employed on a part-time basis, compared to 9.1 million men working part-time in the same year. Ultimately, the gender pay gap divide is caused by a dramatic difference in the number of hours worked between men and women.

The most obvious cause for this discrepancy is children. The labor between men and women regarding childcare and home upkeep disproportionately falls on the woman. The unequal disproportion of labor within the home is an issue that likely will not be changed during Biden’s time in office, contrary to the claims his Instagram posts might make.

So, what’s the bottom line?

Simply put, there is no easy solution to the gender pay gap. Political Scientists and politicians both argue a variety of possible solutions, from mandatory wage disclosure laws to more family-friendly parental leave policies. The solution to the wage gap is most likely a systemic change, rather than change made at the individual level. So, while the National Equal Pay Day is a great opportunity to educate ourselves and reflect on the problems in our workplaces, the change we want to see requires a deeper look at the more complex layers of society.