The American People Elected the First Woman of Color to the Second Highest Office in the Land. What Does Political Science Have to Say About Her Instagram Feed?

Instagram has quickly become one of the most popular social media platforms, surpassing 1 billion users at the end of 2020.  An Insider article posted in 2019 anticipated that Instagram would have a considerable impact on the 2020 election, citing a survey which reported that 65% of Gen-Z respondents say they check the app daily, with many relying on the platform for political news.  Recognizing Instagram’s reach and influence, 86% of Senators chose to utilize the platform in 2020.  Among them was Kamala Harris, the vice-presidential nominee running alongside Joe Biden in November 2020.  Her “We did it, Joe” video, posted to Instagram the morning the election was called, was shared and reposted by celebratory supporters across the nation.

One week before inauguration, Harris posted on Instagram saying she would “be sharing the people, places, and moments that have had an influence on [her] life.”  The first of these was a tribute to her mother, who was “one of the few women of color to have a position as a scientist at [UC Berkeley].” 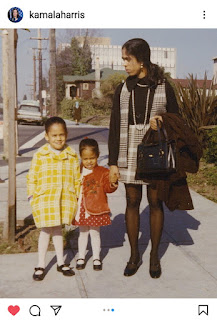 Her mother’s inspiring story and words of wisdom are a recurrent theme throughout her speeches and Instagram feed, most notable in the IGTV titled “Unburdened.”

A separate post pays tribute to other women who “were central to [her] childhood.”  Harris credits her first-grade teacher, Mrs. Wilson, with “[instilling] a sense of hope and courage during the formative years of [her] life.” 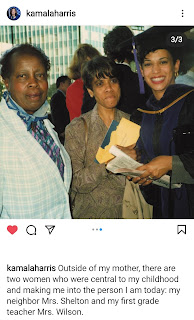 Political science frequently draws on theories from sociology.  One of these theories, gender socialization, states that girls and boys learn what is expected (and frowned upon) for someone of their gender from a very young age.  Kamala Harris’s heart-felt tributes show this type of socialization in action: Harris’s mother led by example as one of the only women of color in her field, showing her daughter that her gender didn’t have to hold her back, and Mrs. Wilson assured her that she could do anything she set her mind to.  These women played an important role in empowering the young Kamala Harris, who was navigating a world which would likely try to tell her otherwise.  Thus, these posts about her childhood socialization serve to partially explain how Harris was able to break through gender barriers and become the first female Vice President.

Another theory which combines the fields of sociology and political science is what is known as the role model effect.  This theory states that women in government have a positive impact on the political involvement of young girls.  According to political scientists Campbell and Wolbrecht, visibility is key.

On her Instagram, Kamala Harris pays homage to the role model effect embodied in Shirley Chisholm, the first African American woman in Congress, and Michelle Obama, who Harris thanks for “empowering the next generation of leaders.” 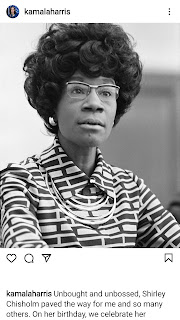 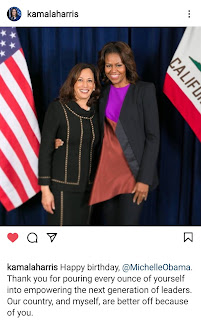 Beyond expressing gratitude for the women who have gone before her, Harris expresses the responsibility she feels in becoming a role model herself.  In an IGTV titled “What’s Possible,” Harris says, “There are a lot of people relying on us… I do not want to disappoint anybody… I also am fully aware that people are watching.”  She clearly recognizes that the political aspirations of the younger generation are largely dependent upon her visibility as vice president.

In line with this idea, Harris posted an emotional video on November 15th showing photos of young girls—many of them girls of color—standing in front of the TV as Kamala Harris gave her victory speech.  The slideshow is set to moving music while the words from her speech play in the background, declaring, “Every little girl watching tonight sees that this is a country of possibilities,” encouraging those watching to “see yourselves in a way that others may not, simply because they’ve never seen it before.”  This video communicates the impact of descriptive representation in a powerful way. 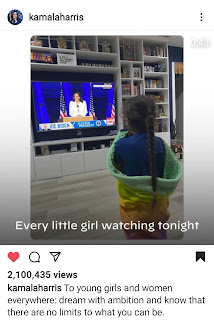 In the caption of a video posted on September 28th, Harris writes, “When young children see someone who looks like them running for office, they see themselves and what they can be, unburdened by what has been.”  Again, the merits of descriptive representation are reaffirmed and celebrated for the impact that reflective demographics can have on young children. 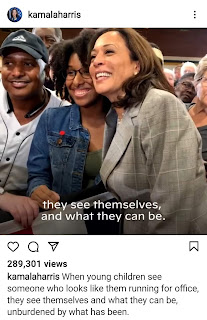 Another video, posted as an Instagram Reel, shows a woman standing behind one of the gates separating Harris from a throng of supporters, shaking her fist enthusiastically while telling Harris, “I’m so happy to see an Indian woman out here!” 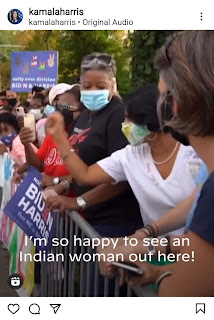 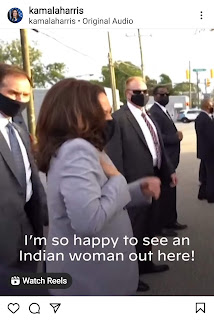 This interaction visibly touches Harris, who writes in the caption that “One of the best parts of being [out here] is meeting people like me who haven’t seen themselves represented on the national stage before.”  Kamala Harris’s vice-presidential bid and subsequent victory offers more than just descriptive representation based on gender: South Asian American women and Black American women can see their ethnic and racial backgrounds reflected in Harris as well.

In a famous excerpt from her victory speech, posted as both a video and a tweet on her Instagram, Harris confidently declares, “While I may be the first woman in this office, I will not be the last.” 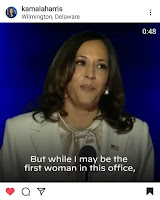 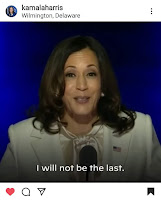 Posted by Jessica Gillich at 9:00 PM