To Worry or Not To Worry: Declining Fertility Rates in the United States 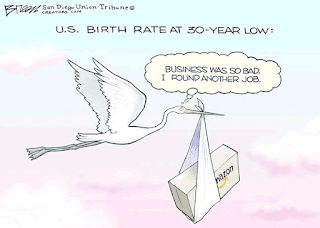 In May of this year, the Center for Disease Control released its annual data for births in the United States in 2018. They found that the birth rate had declined to a record low within the United States. The fact that Americans are having less children seems worrisome on its face, but is there really reason to fear? In this article, I discuss the possible causes of the decline and discuss the reasons for and against worrying.

The Causes of Declining Fertility Rates?
The most common culprit of declining fertility rates is the cultural shift regarding women. In the past several decades, women have begun breaking the prevailing cultural norms by pursuing higher educations and better careers. These pursuits take take women away from the home, leading some women to have less children or to forgo the childrearing experience altogether.

Another possible cause is the lack of newborn-friendly policies in the workplace for these women. This cause is possible, but unlikely. Another industrialized country, Denmark, has seen a similar decline in the overall fertility rate despite incredible pro-newborn policies including 12-months paid family leave and state-funded in vitro fertilization.

Still other reasons have been suggested, such as the decline in the concentration and count of sperm or the increase in frequency and access to abortion. Like many complex events, it is impossible to determine how much effect each of these issues has, but its worth noting that these may all affect the fertility rate to some extent.

The Glass-Half-Empty Approach
In economics, there exists what is termed a "steady state." At this "steady state," the amount of capital (wealth, machines, assets, technology) created is exactly equal to the amount of capital lost to depreciation over time. Similarly, in the study of fertility rates, there is a level at which the amount of children born equals the amount of deaths. This is called the "replacement level fertility," and is set at 2,100 children for every 1,000 women. This means that, holding all else constant, if every woman has 2.1 children in her lifetime, the population would remain at the same level. The reasoning behind this number is simple: every couple has two people, and so if they have two children, they are keeping the population steady. The extra 100 children per 1,000 women accounts for issues such as child mortality.

The CDC's report stated that the provisional total fertility rate within the United States is at 1,728 children per 1,000 women, or 1.73 children per woman. Within the economic "steady state" model, the decrease in capital with an inadequate increase will cause the overall level of capital within a nation to fall. Likewise, when the fertility rate is below the replacement rate, one might expect to see population decline over time.

This decrease in population can have difficult consequences for any industrial society. Traditionally, the duty of caring for the elderly has remained within the family, often falling to the next generation. In the United States, this duty has fallen primarily on the government through programs like Social Security and Medicare. These programs are funded by taxes and payments of the working generation; with a lower fertility rate and thus a smaller successive generation, there are less taxpaying members to help support the larger elderly population. Additionally, the economy of the United States will have to adjust to an ever-shrinking workforce if the fertility rate remains low.

The Glass-Half-Full Approach
While low fertility and its consequences are frightening, population growth is not solely dependent upon the fertility rate. In order for a sub-replacement fertility rate to lead to a decline in overall population, it must be accompanied by a constant or increasing mortality rate (the rate at which people die), and it must not be offset by the immigration. It is unlikely that our mortality rate will increase; likely, we will see it decrease as medicine continues to advance. Likewise, immigration is unlikely stop, so declining population is likely not something to worry about in the near future.

Furthermore, the total fertility rate is only a hypothetical number. Those who work to generate this number look at fertility in one point in time and extend that to estimate the hypothetical number of children a woman will have in her lifetime. While it is certainly a useful number, it is by no means certain. The lowering total fertility rate could very well be caused by many women postponing children until later in life. One study found that while women are waiting longer to have children, women are more likely to have children now than in 1994. In the graph below, the green line represents the percent of women likely to be mothers at a given age. This line is higher than that in 2014 until the late 30s, at which point women in 2014 were more likely to have given birth. 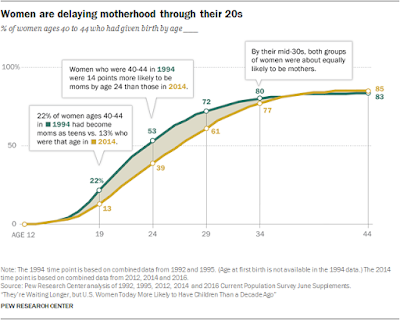 While declining fertility is a pressing issue that has the potential to cause many problems, the exact direction of birth rates in the United States is uncertain. Additionally, The United States might see decreasing mortality rates or increasing immigration to offset the projected lower fertility. Thus, while the declining fertility rate is an issue that deserves our attention and concern, it does not warrant excessive worry.


--Ethan Sulik is a student studying Economics at Brigham Young University.
Posted by Ethan at 11:04 AM