The Tampon Tax: A Glimpse into the Continued Struggle for Female Representation in Politics

What is the Tampon Tax?

On November 20th of this year, law school students around the country purchased tampons and sent in tax refund claims to their tax agencies in protest of the luxury tampon tax that is in place in most states in the U.S. They did this in conjunction with “Tax Free. Period.” which is an advocacy group lobbying for the elimination of the tampon tax.

As of November of 2019, there are 33 states in the U.S. that have a “tampon tax”. A tampon tax means that tampons and other women’s essentials are classified as “luxury goods” rather than “necessities” and are not exempt from sales tax, unlike groceries and many health products, including Viagra.

The frustration behind the tampon tax is much more than a fiscal argument about government taxes, but rather a problem rooted deeper in our political realm. When an item that is very much a necessity for 50 percent of the U.S. population is being referred to as a "luxury" by lawmakers, the demand for more symbolic and substantive representation of women in state politics is illuminated.

The Politics Behind Tampon Taxes


One of the main reasons for the disparity in tax exemptions among states is that the United States does not have a federal sales tax, so it can be up to states, and sometimes even cities, to decide what is and is not tax-exempt. In more conservative states with fewer women representation in politics, there is a much higher chance that a tampon tax will be in place. While 22 states introduced bills to eliminate the tampon tax this year, only two succeeded while the bills in Arizona, Hawaii, Indiana, Iowa, Kentucky, Missouri, Nebraska, New Mexico, Ohio, Tennessee, Texas, Utah, Vermont, Washington, and West Virginia never even advanced past the State House after introduced.

The tampon tax, and periods in general, are strangely a political subject on a more increasingly polarized political climate in the United States. When Representative Sean Patrick Maloney (D-NY) attempted to expense tampons for bathrooms for his staff, the Republican House Administration Committee told him that he could no longer use funds to buy tampons.

While many may hope that an issue that affects each woman would allow for a bipartisan move toward progress, the elimination of the tampon tax has been undoubtedly spearheaded by Democrats. The states that have abolished the tampon tax include the most traditionally blue states such as Illinois, New York, and most states in the New England region.

These states also happen to be the states with... you guessed it... the largest proportion of women in state legislature. Each state in New England has between a 25-50 percent proportion of women in their state legislature. Additionally, Nevada, a state which has also repealed its tampon tax, is the only state with over 50 percent woman representation in its state government. 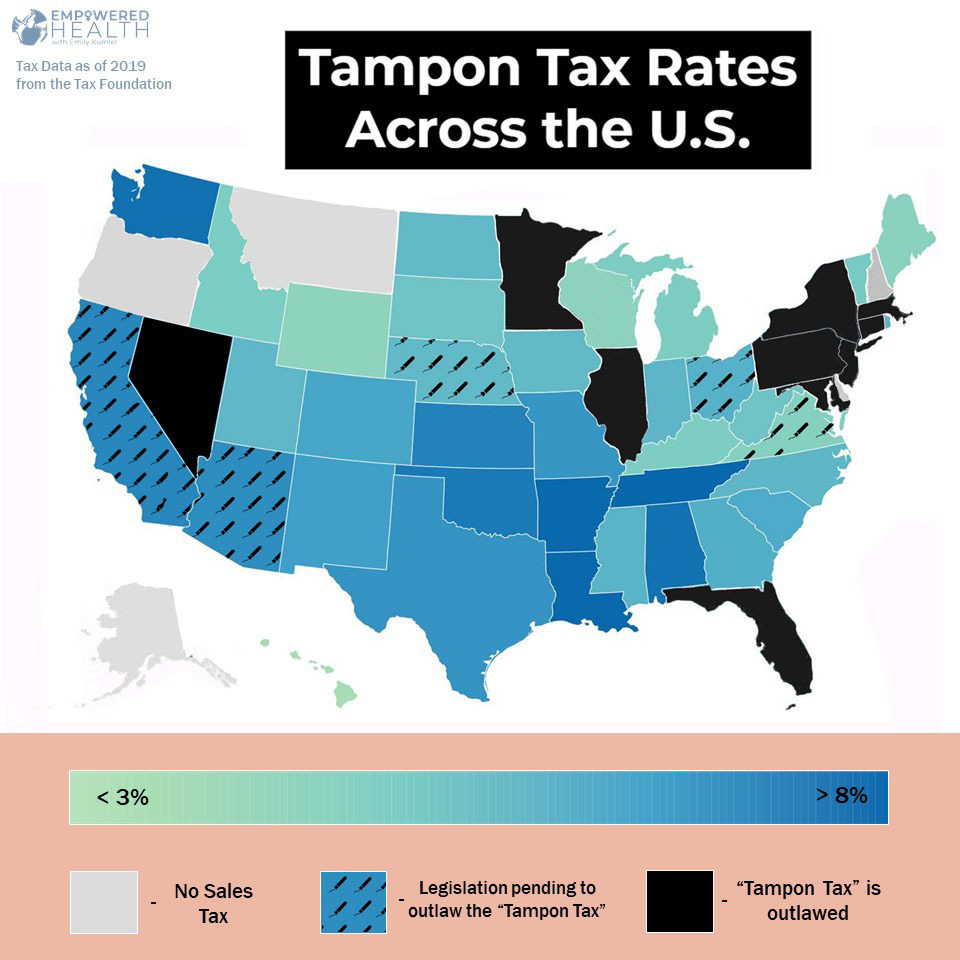 Implications of the Tampon Tax

While this tax may seem minuscule to some people looking at it on a purchase-by-purchase basis, the tampon tax alone costs Californians $20.2 million total per year. These costs are disproportionally being paid by women in states where pixies sticks, donuts, tattoos, and rodeo tickets go untaxed.

Periods are not optional and tampons are very much a necessity for any woman. Aside from the financial implications, many people believe this tax shows a willingness by predominantly male legislators to ignore the needs of women when deciding how to implement and introduce public policy, as a survey conducted by the marketing research company OnePoll on behalf of a menstrual cup manufacturing company showed that 67 percent of women go as far as to say that the tampon tax is "sexist".

According to the precedented trends by other states, the hopes for the abolition of the tampon tax will rely on an increase in representation of women in politics, either substantively or symbolically. Because states reserve the right to declare their own tax policy, this change will have to happen state-by-state rather than federally. This will certainly prove to be a challenge in many conservative states such as West Virginia and Mississippi, where less than 14 percent of the state legislature is women.

It is clear that the tampon tax represents much more than an extra fee tacked onto a hygienic product. The tax is in many ways indicative of the progress we have made in our political representation, and an illustration of how much farther we need to strive to ensure our citizens will be heard equally.

--Jack VonSosen is a Political Science student at Brigham Young University in Provo striving to become a Juris Doctorate candidate at UCLA.
Posted by Jack VonSosen at 5:06 PM