Gender Roles & Political Participation
By elementary school, boys and girls have established autonomous peer cultures[1]. Children are educated throughout their young lives to maintain a social equilibrium by acting within their appropriate social, or gender, roles. These gender roles affect what men and women do every day in their personal and professional lives, as well as the level involvement individuals have in the political sphere.
Studies have shown that women are less involved in politics than men are. Traditional gender socialization has discouraged women from entering the political arena because they are unaccustomed to the political environment [2]. Women tend to believe that they are less capable and unqualified for political involvement because of traditional gender socialization. Even when women are qualified and capable of being politically involved, they tend to be recruited far less than men are. When women are involved in politics, they provide stability to political organizations because they are focused on internal maintenance. Women are also just as successful and capable as men are and perform their duties just as well.
A study of the model United Nations was done in 1999, where male and female delegates were selected to participate in the event. These individuals signed up for the event voluntarily; however, Rosenthal, Rosenthal, and Jones found that male delegates still participated more than the female delegates did [3]. I believe that these female delegates may have participated less due to uncertainty of the event’s dynamics and expectations. In order to test this theory, I looked at an organization comprised of undergraduate students that had relatively low turnover from 2012 to 2013 and examined the differences of male and female participation. 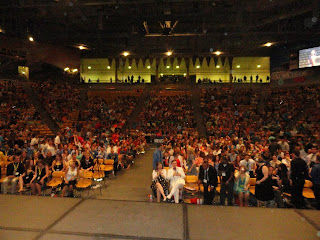 The Intermountain Affiliate of College and University Residence Halls (IACURH) meets three times a year to do regional business. The organization is comprised of thirty-one universities and colleges from the intermountain region, serves as an advocate for on-campus residence halls, and is one of eight regions in the National Association of College and University Residence Halls, Incorporated (NACURH, inc.). Undergraduate students are the main participants in the organization, though some graduate students also participate. I recorded portions of the annual “No Frills” business conference at the University of Arizona where twenty-two schools and ninety-nine delegates were present.
At this conference, I recorded five different sessions of “award bid defense” where candidates were presented for awards and representatives from each school debated to decide which candidate would win the award. Each session was a different mixture of male and female delegates, depending upon who the school selected to represent them in that session. Many of the sessions had more female delegates than male delegates. Some sessions had multiple candidates for the award and others only had one candidate. Levels of experience were also gathered based on how many boardroom experiences the individual had, including the current conference. Three sessions were comprised of the delegates from the conference, while four of the sessions were comprised of the regionally elected executives. I wanted to see the difference in how campus elected individuals and regionally elected individuals acted when put in these situations. I also recorded two “post-no frills” bid sessions for the regionally elected individuals. 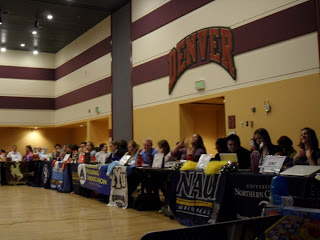 Findings
For the campus elected delegates, I found that men tended to speak more than the women did. In one session, there were three guys to twelve girls, but those three men spoke, on average, 3.33 times, while the girls spoke, on average, 2.83 times. In another session, there were seven men to ten women and the men spoke nearly twice as much as the women did. I found that in the last session men and women spoke about the same number of times and there were ten women and ten men present.  I thought it was interesting that men spoke up more than women when they were outnumbered, which reaffirms the gender stereotype that men try to establish dominance and control. I also found it interesting that women were not overpowered when the playing field was an even number of men and women. When looking closer at this last session, I found that nine of the ten females were “experienced,” meaning that this was at least their second boardroom experience, and only four of the ten males were experienced. I also noted that the inexperienced males spoke up more than the experienced males, but it was just the opposite for the women.
When looking at the regionally elected executives, there were varying results. There are five men on the regional board and two women, and only two individuals are deemed “experienced,” meaning this is their second term as a regional executive (a term being defined as one academic year): one male and one female. In the two bid sessions, the two women spoke more than the five men did. Within the same sessions, the experienced male spoke more than any other individual and the inexperienced males spoke less than everyone else. In the two post-no frills bid sessions, the men and women spoke about the same number of times with the experienced male still speaking the most. In two of these five bid sessions, the inexperienced female spoke the second highest number of times (after the experienced male).

Do gender roles affect political participation?
I believe that they do. It was very clear in this study that the males tried to assert dominance over the conversation and spoke more than the females did, even if the females were more experienced than the males were. Inexperience does not always seem to affect men in terms of willingness to speak, though inexperience can affect whether or not a woman is willing to speak. Gender roles appear to have a large effect on how individuals act.