Round One Sweden vs. Netherlands: Prostitution Laws

In 1999, the world witnessed a new legislation take place in the country of Sweden (Ritter 2008).They passed a legislation which criminalized the buyer of sex only, with no legal impact on the seller of sex. Sweden is not the only country receiving international attention for their prostitution laws. The Netherlands decided to completely legalize prostitution and the running of brothels in 2000 (Siegel 2009). This allowed for prostitutes to be ‘in the system’ through being regarded as any worker, being responsible to pay taxes etc. The question that arises is why two countries in Europe choose two very different legislative approaches in regards to prostitution? Is one better than the other?

Why should I care about prostitution?
So, you are probably wondering why this matters. Prostitution does not affect me, right? You might be surprised. The effects of prostitution have been thoroughly studied by scholars such as Gould (2001). The literature suggests that prostitution is often linked to violence and crime, which both affect society. Prostitutes were often found to be bearers of worrisome diseases such as HIV/AIDS, addicted to drugs or alcohol, and often connected to criminal activity. When Sweden decided to change their approach to prostitution legislation, it was due to an increased worry regarding the international sex trade. A growing sex industry was a threat to Sweden because of the consequences that come from establishments of the international sex industry, such as child pornography, trafficking, organized crime etc. (Wagenaar 2006).

What did Sweden do? They came up with a way to make their country inhospitable to these groups. Through criminalizing the buyer only, thus taking away the demand for sexual services, sex rings had trouble establishing in Sweden. According to the sex traffickers, there were plenty of better options compared to Sweden.

What are some of the results?
The results of the implementation of the Swedish law have been exactly what the Swedish government was hoping for. The law was implemented to combat gender inequality in society as Swedes view prostitution as male dominance of women, and to decrease crime and violence. There was a big commitment from law enforcement and the government to make the legislation a reality. A total of $5 million was dedicated to the police force alone in combating the perpetrators of the new law, and it has yielded good results. Prostitution dropped by 40%, and recruitment to prostitution is almost non-existent (Danna 2012). 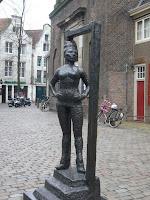 What happened to the Netherlands and their approach? Well, in order to understand why the Netherlands chose their type of legislation and what has happened since the implementation of a fully legalized prostitution business. In the Netherlands, there is a small bronze figure of a woman that is centrally located in the famous Red Light District. It portrays a woman waiting by an open door for a client. Below the statue is the phrase: “Respect sex workers all over the world” (Siegel 2009). Thus, the lifestyle of a prostitute in the Netherlands has a different respect compared to a Swedish prostitute. The fight to legalization was done to realize women’s rights, with major women’s rights movements fighting for the legislation itself.

The results in Netherland have not been as great compared to Sweden. Even though the new legislation is supposed to give the Dutch law enforcement more rights to protect the prostitutes, this has often backfired. Since many prostitutes were smuggled into the Netherlands illegally, they are not in the ‘system’, thus forced deeper into organized crime (Siegel 2009). A study also found that the overall health of prostitutes has gone down since its implementation in 2000 (Daalder 2007). Since the law was implemented to protect prostitutes, one can conclude that the effects have not been as great as intended.

What is the best approach?
So what legislative approach is the best one? Well, comparing the two is difficult for a couple of reasons. Even though they are close in proximity, the two countries have a very different view on gender equality and women in general. What Sweden views as oppressive towards women, the Netherlands view as liberating. In Sweden, feminist movements are fighting for women to be liberated from prostitution, while women’s groups in the Netherlands are insisting on keeping all options open to women when it comes to work. The takeaway point here is to realize that comparisons between two countries are often more complex than simply comparing crime statistics. There is a history and a social mindset in each of these countries that needs to be accounted for as well. For Sweden, prostitution is unacceptable in society. In contrast, the prostitution business is necessary in a gender equal Dutch society. As similar as the countries may seem, both with amazing cheese and chocolate, their attitude towards the prostitution business differ greatly which has resulted in their different legislative approaches.

References
Daalder, A.L. "Prostitution in the Netherlands since the lifting of the brothel ban." Boom Juridische uitgevers 249 (2007): 1-61.
Danna, Daniela. "Client-Only Criminalization in the City of Stockholm: A Local Research on the Application of the "Swedish Model" of Prostitution Policy."Sexuality Research and Social Policy 9 (2012): 80-93.
Gould, Arthur. "The Criminalisation of Buying Sex: the Politics of Prostitution in Sweden." Journal of Social Policy 30 (2001): 437-456.
Ritter, Karl. "Sweden prostitution law attracts world interest." USA Today. http://usatoday30.usatoday.com/news/world/2008-03-16-sweden-prostitution_N.htm (accessed January 31, 2013).
Siegel, Dina. "Human trafficking and legalized prostitution in the Netherlands." Temida 12 (2009): 5.
Wagenaar, H. "Democracy and prostitution - Deliberation the legalization of brothels in the Netherlands."Administration and Society 38 (2006): 198-235.