“I offered a different style of leadership to the House, one that would afford every Representative the opportunity to take part more fully in the process. I believe that debate should be embraced and encouraged. We should not be afraid of this great American process of making law and setting policy. This way of doing business is at times messy, and it is of course, more time-consuming. Not everyone enjoys this change, but I believe it is a healthier way for the House of Representatives to function.” ~Rep. Becky Lockhart on her first term as Utah’s Speaker of the House.(link) 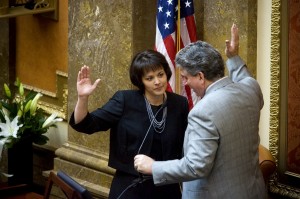 In November of 2010 following the general election, Utah Republicans elected their state’s first female Speaker of the House. Rep. Becky Lockhart of Provo, Utah won the speakership by two votes over the incumbent Speaker, Rep. David Clark.  Lockhart argued that Republicans were tired of Clark’s heavy handedness and were ready for a change. The Salt Lake Tribune reported Lockhart saying, “I think the caucus made a decision tonight that they're ready for a new style of leadership and that's what we're going to provide. We're going to work to have openness and have collaboration and have discussion about the issues." Lockhart has certainly lived up to her promise to provide a new style of leadership. In this post, I’ll look at three characteristics of her first term as Speaker: her facilitating style, her encouragement of debate and openness, and her view on campaigning.

Lockhart as Facilitator
Lyn Kathlene, a professor at Purdue University, has found that leadership style, on average, differs between men and women. In an academic article, she wrote:

“Research has found  that women  do not use  or  perceive  their  positions  of  power  like  their male  counterparts.  Eagly  and  Johnson's  (1990) meta-analysis  of  experimental  and  organization  research  on  gender  and leadership  style  found  that  women  tended  to  lead more  democratically,  while  men  tended  to  be  more autocratic.  Similar results  were  found  in  a legislative setting,  where  women  chairs were  more likely to use their position  as a facilitator or moderator  of committee  discussion,  rather than  as  a way  to  control  witness  testimony,  direct committee  discussion,  and join in the substantive  debates" (p. 561). 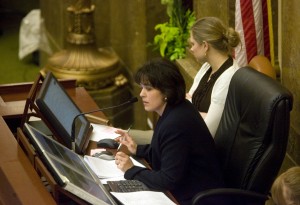 The argument that women have a more facilitating style of leadership finds great evidence in Becky Lockhart’s first term. In legislative sessions, Lockhart tends to let the discussion go where it may so that all representatives can have a say, rather than pursuing a specific agenda. The Daily Herald published an article examining Lockhart’s leadership style, noting that some called it “leading from behind.” They reported that Lockhart “allows the process to work itself out rather than pushing her own agenda.” In interviews with several Republican representatives, there was general respect and appreciation for her inclusiveness, while still questioning the strength of her leadership. Several expressed frustration at the lack of clear direction to how a caucus meeting or House session moved forward.

When you consider Kathlene’s argument that men and women often have different leadership styles, it is interesting to note that out of 58 Republicans in Lockhart’s caucus, only 3 representatives, other than Lockhart, are women. All the representatives interviewed in the Daily Herald article were men. Perhaps their frustration and discomfort were rooted in the fact that they are more comfortable with a more dominant style of leadership.

Lockhart’s facilitating style of leadership has led her to encourage debate in the House and openness between leadership, representatives, and the public. Lockhart came into the speakership on a promise of furthering open discussions and lively debate - and she has done just that. In a legislative report on the 2012 session found on Lockhart’s website, she wrote, “lively debate ensures we create the best policy for the state. It’s great to participate in these discussions.” The Daily Herald reported that Lockhart has been true to her word: “Lockhart has been said to be open and fair to all members of the House. She is not one to cut off debate or strong-arm lawmakers into voting a certain way, as her predecessors did.” While many representatives appreciate the opportunity to have a say in the process, others complain it takes too long.

As an example, in the 2011 redistricting process, sessions often seemed unorganized and occasionally came to a standstill. When progress wasn’t being made, instead of forcing an agenda, Lockhart called for a recess to give more time for discussion with each other and the public. Lockhart, rather than addressing the problem of lengthiness, boasts that the redistricting process was the most open, inclusive and transparent of any in Utah history (Lockhart Website). She and the rest of the redistricting committee held several public meetings around the state to get public input and created a website to give information to the public and to get feedback. Despite Democrats’ complaints, Lockhart believes the redistricting process was open and fair - a legislative success. It was a combination of her trademark emphasis on openness and debate.

Another characteristic of Lockhart’s leadership style is her campaigning tactics. As leader and spokesperson of her party, a speaker is expected to rally support for her representatives during election season and to help in campaigns. While Lockhart has said she is working hard to campaign with her representatives to help them get re-elected (Salt Lake Tribune), she is bucking a tradition of contributing donations to their individual campaigns, calling the practice “wrong-headed” (Utah Pulse). While we could speculate on the reasons for this change, whether ideological or gender-based, this is quite different from her male predecessors. 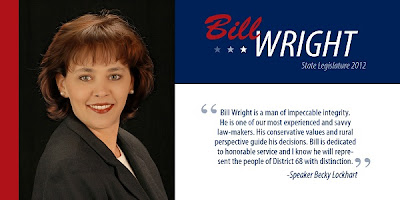 Though Lockhart is not contributing money, she is hoping the time she spends on the campaign trail will translate to votes for her as Speaker. Utah Policy reports Lockhart saying, “I’m taking nothing for granted and will campaign hard [for the speakership].  My style is that I welcome all input.”  Lockhart’s campaigning style fits well with her tendency towards openness and government transparency.

Whether or not Lockhart can be a representation of the leadership style of most women, her case study does fit well with Dr. Kathlene’s argument that women leaders are more democratic and facilitating. This facilitation and encouragement of debate and openness has led to both critics and supporters, which may be affected by the fact that the vast majority of the representatives she works with are men. However, Lockhart’s efforts to include every representative and to campaign diligently must be paying off - as of today, she has no challengers for her position as Speaker of the House (Utah Policy). In the end, perhaps we can conclude that Lockhart’s representatives prefer a more open approach, even when frustrating, as they have made Lockhart a shoo-in to again lead the Utah House of Representatives.
Posted by Taylor at 10:13 PM