The effects of gender in media coverage

The media has extreme power when it comes to selectivity of who to cover, and who not to. Some of many of media’s roles are to serve as a mentioner, expectation-setter, and agenda-setter. As a mentioner, the media decides whose name gets out in the media. As an expectation and agenda-setter, the media can cover particular angles of the politicians in the spotlight and therefore control where the focus will be. The media paid extensive attention to the 2008 vice presidential debates, much more so than the debates between McCain and Obama who were running for president. Pew Research reported that “Last week Palin led all the candidates in coverage, registering as a significant or dominant newsmaker in 51% of campaign stories. /…/ Biden, who has largely been ignored by the media, was a significant or dominant factor in 30% of the stories last week.” (Jurkowitz 2008) 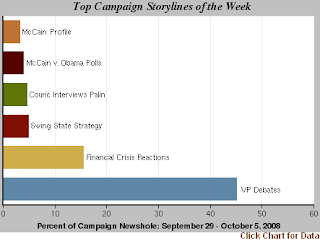 Being the first Republican woman ever to be nominated to be a vice presidential candidate; Sarah Palin was a fascinating politician for media to scrutinize. Studies confirmed this fascination through stating that more people paid attention to the vice presidential debates than the presidential debates. “Discussion about McCain selecting Palin accounted for 7 percent of all television election coverage of the 2008 campaign, while the debate between Palin and Biden was the most-watched vice presidential debate in U.S. history, attracting nearly 70 million viewers.” (Forster 2012) Therefore, this election is a good one to research in order to find out what role gender played in media’s coverage of the candidates Joe Biden and Sarah Palin.
Palin seemed to attract more coverage in media than her opponent Biden did regardless of the type of media outlet. “The average number of stories a day in overall coverage was 36 for Palin, compared with 14.9 for Biden. On television, Palin was the subject of 8.8 stories a day compared with 4.6 for Biden; in newspapers, it was 15 compared with 8.2 stories a day, and on political blogs, 14.2 compared with 3.2 stories a day.” (Forster 2012) So first of all, media seemed much more interested in Palin than Biden. Palin had the novelty of being the first Republican woman on a major party ticket, which means that her gender put her in the spotlight as soon as she received the nomination. 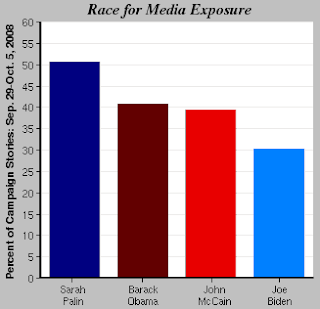 The evidence that Palin was covered significantly more than Biden raises the questions of why and if the content of the coverage incorporated gender stereotypes. A study by Bode and Hennings confirm the gendered differences within the coverage of Palin and Biden. The study anticipated that the gender stereotypes of men and women would emerge and be visible through media coverage. Biden was hypothesized to receive more coverage concerning male-dominated topics, such as the economy and foreign policy. Palin was expected to receive much more coverage dealing with Sarah Palins life outside of politics – her family relationships, her sense of fashion (or lack thereof),  and her stance on more social rather than political issues. If there were any political issue coverage of Palin, the issues were anticipated to correspond with what women are thought to be better at. Those issues, called women’s issues, range from education to health care. The authors of this study also found that “the media did tend to talk about family (newspapers and television) and physical appearance (newspapers and blogs) significantly more in coverage of Palin than in coverage of Biden”, along with the finding that “Biden received significantly greater coverage dealing with foreign policy (newspapers and blogs) and the economy (television and blogs).” (Bode and Hennings 2012) We can draw one conclusion from these findings – media already choose based on the gender of the candidates what to focus their coverage on.

Another study was conducted by Forster after the 2008 race that further confirms the findings in the first study. As stated earlier, Palin’s immense coverage seemed to be focused on gender stereotypes including stories addressing her fashion sense, her family, and her position on social issues. However, one surprising finding that contradicts the assumption that Palin would have received more coverage regarding women’s issues, such as health care, suggests that Biden received significantly more coverage on these issues than Palin did. This surprising finding is confirmed by Bode and Hennings as well: “Biden actually received significantly more coverage [than Palin] in each of those realms [education and health care] (in television and blogs).” (Bode and Hennings 2012) Female politicians are often gendered into a corner of politics where those topics belong to the thought to be “experts” – women– however, the 2008 election showed some evidence of an anomaly in that case.

So what effects does this difference in coverage produce? The authors of the study of the differences in coverage and its content between Palin and Biden state: “Each of these differences could have had important influences on public opinion formation and the public's voting decisions in this particular race.” (Forster 2012) More research has to be completed in order to fully answer the question of how undecided voters tend to respond to media’s coverage of female and male candidates, which is far from gender neutral. Does Sarah Palin’s skirt being too short affect voters? These are the types of questions that will shed more light on the power that the media possesses when labeling Sarah Palin’s coverage as a ‘feminine’ one and Joe Biden’s as ‘masculine’.