Laura Chinchilla, Costa Rica’s first female president elected in 2010, has an image to uphold to an international audience. Barack Obama, the first African American president of the United States also has millions watching his every move. How these politicians are portrayed in the media shapes public opinion, with gender being an incredibly influential factor for Chinchilla.

The media reports her popularity among all economic and social classes of women. Single mother Heizel Arias voted in prison and spoke highly of Chinchilla by stating, "I voted for Laura Chinchilla because she has promised to fight for women...She was the only one who visited us and told us her plans and I believe in her." (Jimenez, 2010). The media has portrayed Chinchilla as the national spokesperson and advocate for women’s rights in Costa Rica. Many news articles focus discussion on Chinchilla’s stance on traditional women’s issues such as education, abortion, and religion. Articles included the fact that she was a wife and a mother of a teenage son as well (Padgett, 2010). Her personal life as a wife, mother, and essentially as a woman intertwines heavily with how media reports on her presidential success. 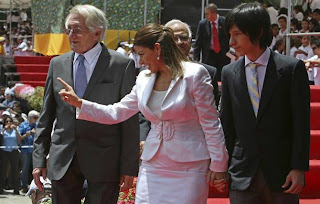 One particular article attributes Chinchilla’s declining approval rate within the last two years to the lack of strong direct leadership (Miguel, 2012). As of August, 53% of Costa Ricans held an unfavorable view of her administration. Author Veronique de Miguel goes on to elaborate what the source of the problem is by stating, “Despite this, there are not direct accusations of corruption for Chinchilla herself, and although considered ‘honest’, she is also thought of as a weak President who is not able to impose herself to her Government team” (Miguel, 2012). Gender undertones are extensively implied in this article, attributing the lack of stereotypical masculine characteristics of Chinchilla to the decrease of success in the Costa Rican government. Stereotypical masculine characteristics include being a strong leader, dependable, and able to get any job done. The media will be significantly more criticizing when women don’t succeed in politics than men. Although honesty has been traditionally seen as a gender neutral characteristic, in this article it is seen as a feminine one and plays into all of the other masculine qualities Chinchilla seems to be lacking.
The media in American is very partisan either in praising Obama or being negative towards him. Whatever the political beliefs of different news sources are of the American president, there is a constant in how the public views him. Obama is seen as powerful and a leader of government. What he does with that power, however, is debated among different sources of the media. He provides an image of the American and many people have found that they can relate to the president in one way or another. With this descriptive representation, it is difficult to find that he lacks the masculine characteristics needed to be a strong political figure. There is less focus on Obama’s family and personal life in comparison to Chinchilla and this reflects the gender socialization of how men are the ones that are supposed to provide for the family, and when women play that role as well, it’s more difficult for them to balance their family life.

Although many of the articles did discuss her involvement in women’s issues and talked about her family life, articles talking solely on Chinchilla’s fashion choices were scarce. In the case of this Costa Rican president, many articles tended to focus on the issues her government was facing and how she was managing the country. This was an unexpected difference between how American politicians have been reported. In the United States, fashion among politicians regardless of gender has always been extensively written about. This may be due to cultural differences and how the importance of fashion in general is viewed among different countries.
There has been a significant amount of articles written about the American president’s wardrobe and fashion choices. Many articles describe how power is associated with his dark tailored suits and ironed white collars. The media directly relates the correlation between looking professional and being capable and able to deliver. Where women have more of a variety of fashion decisions they can make on how they can look more or less professional, there is more of a standard look for men. A man in a suit signifies importance and dedication, someone that should be taken seriously. Media coverage of President Obama’s fashion choices is another venue for Obama’s image to be shaped by the general public. BEcause Chinchilla doesn’t have as much coverage on her attire, she doesn’t have that venue to boost her public image. 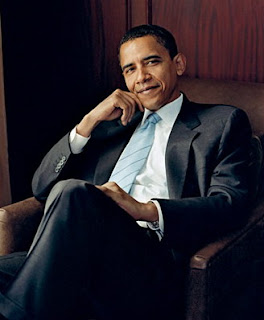 In 2011, Obama was titled as the number one most powerful person in the world according to Forbes (Forbes, 2011). Chinchilla was listed as number 86 on the list of Power Women (Forbes, 201). Setting aside other factors such as political influence and international power, the list titles themselves have implications about gender. On Obama’s page, it has his income listed in bold whereas no income is listed on Chinchilla’s profile. People often associate power with money and associate that as being a primarily male’s realm. Stating how much one makes almost places a value to how much they have contributed or how intellectual and hardworking they are. Because Obama has his income listed, this is sending a message about how strong of a leader he is. On his profile page, it only lists his accomplishments as well. On Chinchilla’s profile page, it listed many reasons of how her country was suffering, as well as her accomplishments. Perhaps Obama’s description was significantly positive because men are seen as being able and capable and in order to be the most powerful person in the world, you need to have those characteristics.
The media influences public opinion of political leaders of different genders. Through the focus on distinct issues of both genders, implications are made about that person’s gender and the competence they have to lead a government. For President Obama, regardless of what he chooses to do with his power, he still has the characteristics to lead his government. Chinchilla, on the other hand, is struggling with the media’s portrayal of her ability to lead her government, with gender undertones being a factor in her criticism.