What effect do gender roles have on men and women’s views in the workforce? I conducted a three question survey where I focused on three different areas of how the workforce influences opinion of both male and female college students. I looked at potential career plans post education, self evaluation of societal influence in regards to career choice, and priorities when considering career choices. Some of the data supported the research read in class about societal influence, whereas other parts of the data didn’t support other research discussed in class.

The three question survey was given to twenty college students. Although many of the participants were of the LDS faith, not all of them attended Brigham Young University. Ten of the students were male and ten were female. The following questions were asked: Does your future include a career in the work force of any kind after your time in school? On a scale of 1-5, how influential do you feel social expectations were in forming your career choice or absence of career choice (5 being the most influential)? List the following in order of importance when considering your career choice: income, family time, location, and vacation time.

Careers in the Future 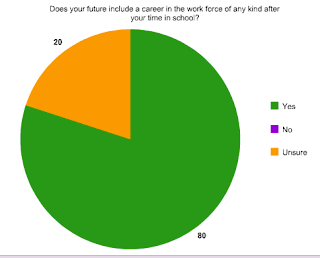 The first question had the most surprising results. Out of ten men, 8 stated that their future included a career in the workforce. Two of them stated that they were unsure and none answered no. For women, ten out of ten stated that their future included a career in the workforce after their time in school. The results were surprising on the men’s side of the data because of the implications that it gives about what men see in their futures. 20% were unsure if a career was an option for them. Why are these results surprising? Through various socializing agents such as family, religion, and the media, people have been socialized into believing that in order to have a stable life, one must be financially stable as well. Being financially stable requires having a career of some sort. A Proclamation to the World defines men and fathers as being, “...responsible to provide the necessities of life and protection for their families” (Hinckley, 1995). That 20% of men in this study are unsure if they are going to have a career in their futures goes against what people have learned through socialization. This is seen as a negative thing in men because it shows the possibility that they may not be providers.

The next question involved more of a reflection on how each participant felt social expectations had affected their career plans. On a 5 point scale, the men averaged out to 2.4 and the women averaged out to 2.7. The difference wasn’t as large as I was anticipating, but there is still a .3 difference in how men and women feel that social expectations affect their career plans. The women’s mean may be higher because there has been more of societal definition of where the woman’s place should be compared to men. Class readings show that the way women behave correlates with how capable they are seen. For example, women that are seen as too feminine or not feminine enough are seen as less capable. This is known as the Double Bind principle (Jamieson, 1995). How the media influences how much femininity is the right amount for women, women are going to see themselves in a particular perspective, which will influence how competent they are seen by others, especially in the workplace. For example, female surgeons aren’t typically seen as very feminine or very masculine. In this way, the results show that women more than men feel like social expectations have in some way influenced their career choices. 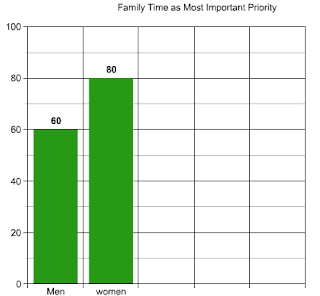 The last item on the survey asked to prioritize income, family time, location, and vacation time in relation to career choice. For the men, the order was: family time, income, location and vacation. For the women, there were more conflicting results. Family time was the most important, but location was tied for being most important on the second and third priority, with income following closely behind in each category. Vacation time was last on the list, like the men. What I found the most interesting from these results was by how many votes each priority won its place by. For the men, the majority was 60% for family time being the top priority. However, for women, 80% of the participants stated that this was the top priority. The results of this has some implications about gender roles. It reinforces the traditional thought that women are going to make their children their first priority, especially within the workforce. The traditional thought of a woman’s place needing to be in the home seems to have some influence on the priorities of the majority of women. Women are very aware of the statement they are making when they join the workforce, and it’s interesting to see that their top priority is still being with their families.

This survey was able to give further insight on how college students see their futures and their careers. This relates to gender and politics because the same principles that apply to women entering the workforce also apply to women entering the political arena. Just how young girls are influenced to join the work force by exposure of other women succeeding in it, they are also influenced to join politics through this role model effect (Campbell and Wolbrecht, 2006). While some of the data was not expected, it led to potential explanations as to why men and women behave differently. Overall, the data supported the idea that women feel that societal expectations has played more of a factor in choosing their careers than men and a great amount still feel like family time is the most important priority when looking at a career.