Women In Politics: Rwanda Being a Leader By Drake Fuhriman

We live in a world that throughout history has been a man’s world. Until a few decades ago, women were still viewed as being subject to what their fathers, husbands, or male peers believed. First came women’s ability to vote, many years later led to more acceptances of women having jobs outside of the home, and now we are working toward equality. There have been large improvements, but there are still stereotypes and views toward women and the decisions that they make. In particular I wanted to focus on women in leadership positions within the government.
Considering that countries have been stuck in this trap of only having men in positions to make decisions for the country it has led to a giant misrepresentation of the population considering have of it is women. It is said, “The argument that men cannot represent women, for example, suggests that women cannot represent men.”(Mansbridge 2005) Having a government strictly made up of men or women is not a good representation of the country as a whole and therefor groups of people will be disadvantaged due to laws. The argument I want to make is that there needs to be equality in this representation to be able to really make countries great.
I want to focus on the country of Rwanda; this is an interesting country because it actually leads the world in women representation. About 64% of the government is made up of women that have led to many improvements to the countries economy, living conditions, trade, and perception of women. To give a background of Rwanda it is made up of three separate ethnic groups, the Hutus, Tutsis, and the Twa. The Tutsis were in position of power but only made up 14% of the population compared to Hutus that made up 85%. There was conflict over power considering Hutus were band from power and therefor grew frustration, this frustration led to the forming of the Rwandan Patriotic Front. Through the RPF is caused a civil war that went on for about 3 years until the conclusion with the Arusha Accords. This lead to peace between the RPF and the Rwandan government until April of the next year when the President was assassinated. President Habyarimana’s plane was shot down, which up to this day the responsibility for the killing remains unknown. There is speculation however that extremist Hutus were responsible considering how quickly they were able to respond in the manner that they did. The reason that I explain this is due to the fact that this event led to the genocide of over 800,000 people. This number is massive, but even more significant when you understand the population of Rwanda was only about 2 million people.
“It could be argued that Rwandan women took control of their country's affairs simply because they had no other choice. Indeed, following the 1994 slaughter, so many men (both Tutsis and Hutus) were killed, that the country's gender profile tilted heavily in favor of women – reportedly, by a 60-40 percent basis.”(Ghosh 2012) You could take this approach to why so many women are now involved within the government or just the thought that they are more open to women in leadership. Whichever way you are to look at how the representation came about all that matters is that it happened. From the graph below you can see women throughout the world and the issues that they spend their time and energy on. 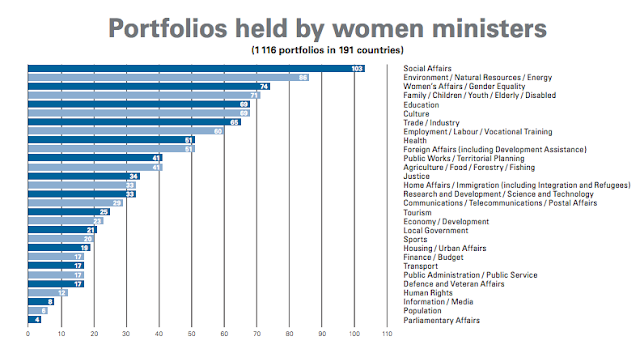 During the 2008 election, a Rwandan female voter named Anne Kayitesi explained to BBC: “The problems of women are understood much better, much better by women themselves. You see men, especially in our culture, men used to think that women are there to be in the house, cook food, look after the children... but the real problems of a family are known by a woman and when they do it, they help a country to get much better”.(Ghosh 2012) From the image above it proves to you just how true this woman’s statement is, women focus on families and the people that will be in charge of the future of the country. Also, women tend to be more interested in children and family issues, women’s health, and general health issues. (Swers 2005)

Since 2003 there have been major improvements due to the women influence a few examples are: The achievement of Category One status for rape or sexual torture in the post-genocide prosecution guidelines (1996), a law extending the rights of pregnant and breast-feeding mothers in the workplace (1997), a law on the protection of children from violence (2001), the inheritance act (2003) and the extraordinary gender-sensitive Rwandan Constitution itself (2003).(Devlin 2008)
Rwanda, which since the 1990’s has increased women leadership substantially and made leaps and bounds toward improvement of their country, I want to relate it now to the United States. The United States is fairly low on the list when it comes to women within the government; only about 20% of the government is comprised of women. There are many issues, which have influenced that percentage, but this unequal status that we have definitely leads to problems. Some of these issues are the misrepresentation that was mentioned prior, studies have shown that increase in women presence leads to more policy being passed, and living standards. I wanted to bring this up because its obvious to see that the United States is better off then Rwanda, but the rate at which Rwanda is improving Is much greater then that of the United States. I wonder if the United States were able to gain equality in terms of representation how much greater our country would be considering the impact that women have. 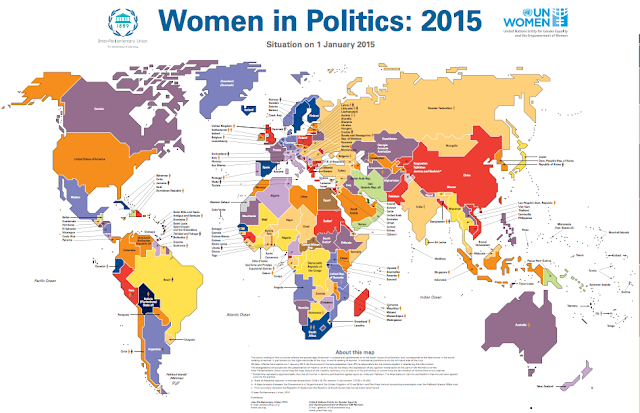 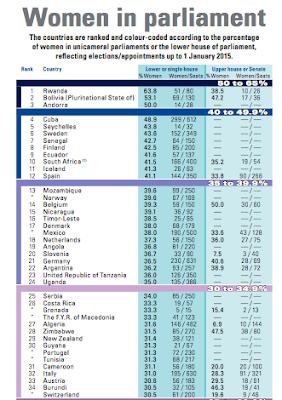 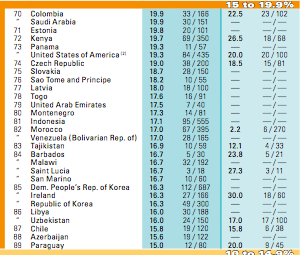 Devlin, Claire and Robert Elgie. 2008. "The Effect of Increased Women's Representation in Parliament: The Case of Rwanda." Parliamentary Affairs 61 (2): 237-254.

Hill, Steven.  "Why Does the US Still Have So Few Women in Office?" The Nation. 2015. Accessed November 16, 2016. https://www.thenation.com/article/why-does-us-still-have-so-few-women-office/.