The Supreme Court as an Agent of Gender Socialization 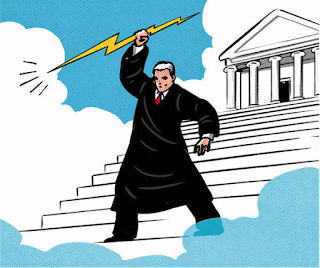 What is responsible for the changing role of women in our society?

There are many things responsible for societal improvements in how we see the "woman's role" in society. To answer this question, many look to influential women in history. Others look to specific events and their direct effects on how we view women. However, it is also important to capture the government’s role and influence on this type of gender socialization. Throughout my research, I have found that those on the highest court in the American government not only influence the law; they have been shown to also influence public opinion (Blake, 1977).

How can the Supreme Court influence gender roles?

Through its major rulings, the Supreme Court has a historical role as "republican schoolmaster”, teaching virtues to the public (Kosaki and Franklin, 1989). Since many citizens hold the Court in high regard, the Justices hold power to persuade and legitimize the principles embedded in their rulings (Blake, 1977; Marshall, 1987). These rulings may signal to the public that something is virtuous or immoral. While many decisions go unnoticed, some come more into the public eye than others. This public attention opens the minds of the public to become influenced and socialized over a short period of time (Marshall, 1987). Through its interpretation and ruling in Roe v. Wade, the Supreme Court legitimized a modern idea that a woman has the right to make her own decisions over her health and her life. 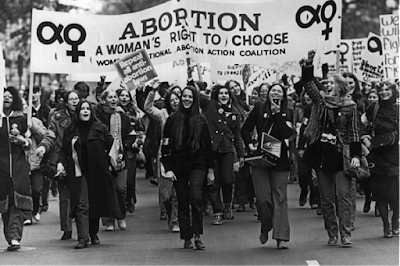 First, the Roe ruling had an impact on how the public viewed the woman’s right to make her own health decisions. While the Court rejected the “right to life” view in terms of the fetus (Roe v. Wade, 410 U.S. 113, Section IX), the ruling explicitly accepted that women held a right to privacy over their own health. The Court went further, signaling to what they believed an important interest, "the State does have an important and legitimate interest in preserving and protecting the health of the pregnant woman" (Roe v. Wade, 410 U.S. 113, 162). Soon after the ruling, abortion favorability increased, opening the door to allow women even more rights over their bodies (Kosaki and Franklin, 1989; Planned Parenthood v. Casey, 505 U.S. 833 (1992).

The socialization of women’s right were already shifting from other forces (Newport et. al, 1999), yet the Roe ruling ignited a public discussion on women’s health (Greenhouse & Seigal, 2011). Before the Roe ruling, some were not even aware of the serious dangers of pregnancy (Kosaki and Franklin, 1989). Mostly comprised of men, many displayed a serious lack of knowledge on many of the worries held by some to-be mothers (Greenhouse & Seigal, 2011). Sparked by the doctrine in Roe, the public learned more of the health concerns of pregnancy, like how a state-enforced pregnancy could damage a woman’s body (David, 1992). This understanding opened the eyes of many. As some on the fence of the “pro-choice” stance came to understand the concerns, many lent their support in empowering women in their own health decisions (Kosaki and Franklin, 1989). While research does not indicate how substantial the ruling was behind the increased support for the legalization of abortion, the trends show a significant change just a few years after the 1973 ruling (Harris, 1977). 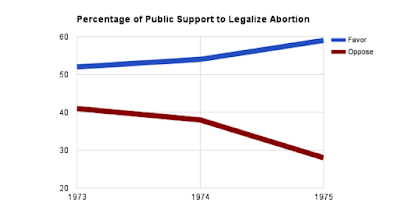 While the right to ownership over one’s own health decisions seems quite obvious, it is important to note that many saw this as a new idea. Long before the 1970s, many held the idea that women were not their own decision-makers (Wollstonecraft, 1892). Centuries past included depictions of a pseudo-slavery, where women were to marry and become the property of their husband (Burns, 2001; Gordon, 2002). The male dominated past created a truly low glass ceiling for change. Through Roe’s spark of attention, people learned more of the health risks giving further empowerment to women’s health decisions.

Second, the ruling also had an impact on how the public viewed the independence of the woman and the role of the mother. Before 1973, a majority of the public had a hardline socialized view of what a mother should be. The Court had ruled and empowered women by finding that the constitution protected and “encompass[ed] a woman's decision” with regard to abortion. While the “woman’s decision” language in Roe may seem too subtle to directly affect women to make independent decisions, many changes followed. Through each passing year, women grew to increase in their participation in higher education and in the workforce (Kelly & Slaughter, 2012; Pew, 2012).

Coming in a time when a changing gender role was malleable, the Court provided empowerment in the role of the mother. Before this time, “Mom” was supposed to stay home, clean, and wait for her husband to come home from work (Slaughter, 2012). Major decisions were to be made primarily by the man of the house (Madsen, 2006). The woman’s role was mostly limited to bearing and raising children. Yet, around the time of the ruling and especially after, the idea of the “strong woman” increased (Gallup, 2012). The share of women in the labor force also grew during this time (Bureau of Labor Statistics, 2014). From the house to the workplace, over the following decades women began to break through their glass ceiling with the help of the Court’s legitimization of women’s choice. Although the ruling must have taken less direct influence in this trend, the few years before and after the ruling shows a social change in the role of the mother (Kosaki and Franklin, 1989). 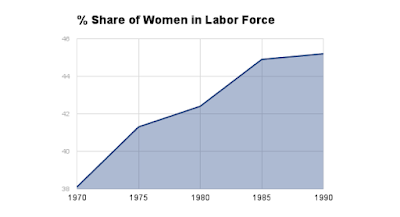 The Supreme Court’s ruling in Roe v. Wade legitimized a modern idea of the independent, powerful woman in the American mind. Before the early 70s, many held a completely different socialized idea of what a women should be. However, as the Supreme Court took the role of “republican schoolmaster”, the changing idea of women was instilled in the American mind (Kosaki and Franklin, 1989). After Roe, many began to see the health choices of women to be their own. The role of the mother was also altered and socialized in this way. Perhaps the Supreme Court was never supposed to signal to certain virtues. Yet, through Roe we see a different story.