In Utah, women’s representation is quite low amongst state and national congressional positions. Both Senate members from Utah are male and out of four Congress members, only one is female. Only 16 women serve in the Utah State Legislature. In other local offices, there are not very many women holding office. In Provo for example, no mayor has ever been a woman and only one woman sits on the Provo City Council.

The lack of female representation in government offices suggests a leak that is disadvantageous towards women exists in what is known as the pipeline to political office. The pipe is a vehicle for members of the general citizenry to achieve political office; however, holes in segments of the pipe prevent all individuals from making it to office. Each segment of the pipe carries less of the general citizenry than the prior segment.

Some leaks in the pipes are intentionally institutional, however others can come from socialization or culture and unknowingly cause specific groups to not travel through the pipe to office. Women specifically are often one of the groups in national, state and local political offices.

But where in the leak in Utah's pipeline to political office?

Neither men nor women are at a population disadvantage in Utah, meaning there is no “leak” in the political pipeline at the onset. Out of the approximately 2.76 million people who live in Utah, 1.38 million are male and 1.37 million are female.

However, not all people in Utah are eligible to run for office due to age, residency requirements and cost to file. These institutional measures do not innately cause less women to move down the pipe to eligible, because the measures affect both sexes equally.

Traveling from eligibles to aspirants is where many people leave the pipeline. Only 2 percent of Americans said they have ever run for federal, local, or state elected office according to Pew Research. Men, white individuals, and post-graduates are disproportionately likely to seek office. 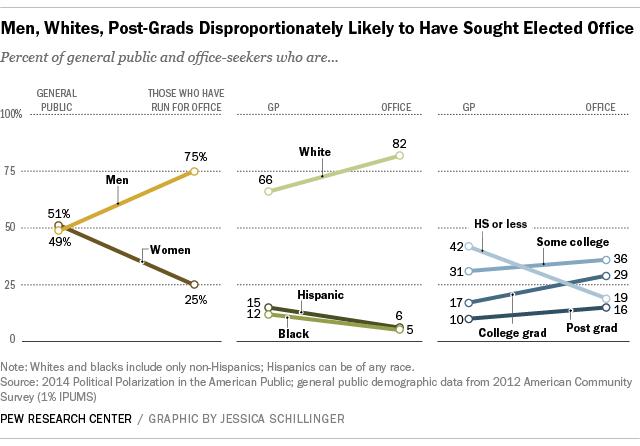 The same Pew Research study cited only 0.5 percent of women claiming they had run for office. A possible reason why women do not run for office as often as men, despite being equally as qualified, is because they do not believe they are qualified enough.

In the book "It Still Takes a Candidate: Why Women Don't Run for Office" by Jennifer L. Lawless and Richard L. Fox the authors describe how women perceive politics as a masculine profession and when consider running compare themselves to the ideal political candidate. Men on the other hand compare themselves to current candidates in office and think, "I could do as well or better than the person in office."

The perception of politics as being masculine may create a larger leak for women in Utah, especially those who are members of The Church of Jesus Christ of Latter-day Saints. The LDS faith prioritizes motherhood and other characteristics that are often perceived as feminine for women. Female members of the LDS faith may shy away from running for office because they perceive politics as being too masculine for them. Additionally, younger potential candidates may shy away from running for office, as they may not have "enough" time because of homemaking responsibilities.

Because LDS church members make up approximately 60 percent of the Utah population, this leak is significant in the state of Utah.

While individuals can self-select themselves to run for office, recruitment is very important for individuals who are trying to obtain office because it is a form in which political parties send cues to voters.

In a 2013 study, S. J. Carroll and K. Sanbonmatsu found that more than half of female state legislators had not considered running before a party leader suggested they run. Women also must feel like elite campaign support will be given to them the same way it is given to men in order to feel that the recruitment is legitimate according to a study completed by Daniel M. Butler and Jessica R. Preece.

While there has been no published sources on recruitment tactics specific to Utah, responses to recruitment was studied by Preece, Olga Bogach Stoddard and Rachel Fisher. The group found that when they recruited highly active Republican party members in Utah county to attend a free candidate training seminar, women were half as likely to respond to the invite as men.

The group of researchers also looked at data from the Utah Colleges Exit Poll, which indicated that self-reported political ambition increased for Republican men with the opportunity of elite recruitment at a rate significantly more that Republican women.

While this study only focuses on Utah Republicans, Republicans often win the majority with in the Utah State Legislature.

Generally, women are just as likely as men to be elected. A major reason why they aren't more women in political positions is because they don't run. There isn't any evidence that points otherwise in Utah.


The major leaks in Utah's pipeline to political office exist in the segments of aspirants and recruitment. This is possibly due to certain roadblocks that women perceive. These perceptions held in Utah may be somewhat unique due to the "Mormon" culture in Utah; however, the general female trend of seeing politics as generally masculine matches attitudes of women across the United States.

To "plug" the pipeline, Utahns will need to encourage and recruit more women to run for office.
Posted by Unknown at 9:48 PM