Trump vs. Clinton: Media Coverage of the 2016 Presidential Election

With each passing election cycle, it seems as if there is more and more media coverage of the presidential candidates. And these days, the media is covering far more than just the candidates’ positions on the issues. Both their personal lives and physical appearances have gone under increased scrutiny in recent decades. The 2016 U.S. presidential election presented an entirely new narrative for the media to report on: for the first time, a woman, Hillary Clinton, from a major party was running against a man for the office of president. An election plagued with many controversies on both sides, there was no lack of intense coverage of both major candidates. But did the media treat each candidate, Donald Trump and Hillary Clinton, equally? 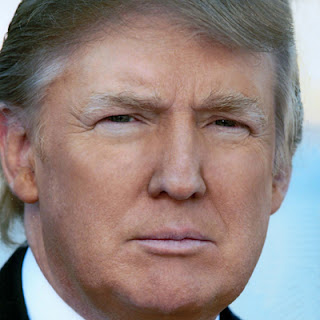 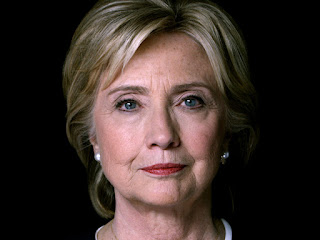 Both 2016 presidential candidates have been prominent figures in the media for several decades. Although not a lifelong politician, Donald Trump is a businessman and entrepreneur and even has his own reality television show. He is no stranger to the public eye. Hillary Clinton has been active in American politics for several decades. Having served as senator of New York and Secretary of State to President Barack Obama, Hillary Clinton too has received her fair share of media attention. In the Democratic primary, Hillary received the majority of the media attention, presumably because of her gender. In the Republican primary, Donald Trump received a vast majority of the media attention most likely due to the passionate, and often offensive, comments he would make. Another reason Trump received so much attention is likely due to the fact that he was surging in the Republican primary polls, despite his extreme lack of political experience.
It is evident that both candidates received nearly equal coverage in the media during the primaries. This trend continued into the general election, after each candidate became his or her respective party’s official nominee. Once the candidates were nominated, controversy seemed to follow them along the campaign trail. Despite FBI director James Comey clearing Hillary Clinton in the FBI investigation regarding her emails and Benghazi in early July, the media continued to report on the issue up until Election Day. The media, typically more conservative news outlets, continually used this email scandal against Clinton, claiming it made her unqualified and incapable of holding the office of President.
On the Republican side, most media outlets on either side of the political spectrum focused on Trump’s opinions on positions, many outlets commenting on the audacious nature of some of his proposed policy plans. His past business record was a focus of media coverage as well. About a month before the election, a decade-old audio recording revealed Donald Trump having a lewd conversation with Billy Bush. The media was quick to condemn Donald Trump for his words and purported actions. However, some news sources attempted to brush the scandal off as “locker room talk.” After the tape was released, Sean Hannity of Fox News admitted that Trump’s words were wrong but compared it to Bill Clinton, claiming Clinton’s actions were much worse than Trump’s. Hannity claimed that the coverage of the tape scandal was biased in favor of Clinton. Dinesh D’Souza chimed in with, “…never before have I seen the media so aggressively huffing and puffing to drag this crooked hag across the finish line.” D’Souza’s “crooked hag” remark was an obvious reference to Democratic presidential nominee Hillary Clinton.
D’Souza’s “crooked hag” comment shows an extreme difference in coverage between Hillary Clinton and Donald Trump. Although Trump did receive his fair share of attacks and insults, they were not of the same gendered nature as the insults Clinton received. Vocative conducted a survey of social media to measure the sexual insults directed at the presidential candidate. The survey focused on tweets over just a two-week span. Hillary Clinton was called a “bitch” nearly 2,000 times in this brief time span. Other offensive terms were used against her at high rates as well. This survey also found that the most popular term mentioned in reference to Clinton was “husband.” This survey found many harsh tweets referring to Bill Clinton’s extramarital affairs and blaming Hillary Clinton for said affairs. This rhetoric was also seen in other media coverage. Her opposition, Donald Trump, fueled this type of coverage. He insistently brought up Bill Clinton and his infidelity. Even in the debates, Trump would refer to Bill Clinton and his policies and opinions, not his actual opposing candidate’s, Hillary Clinton’s, views. 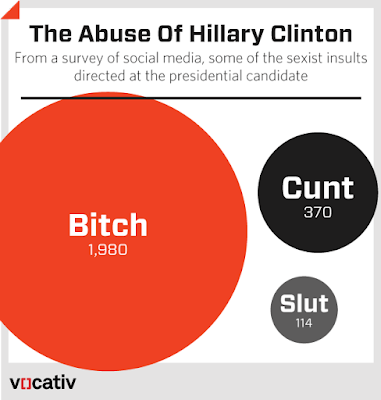 Trump’s wife, Melania, was subject to some scrutiny in the media due to her controversial past: both her immigration status and scandalous photo shoots. Despite the reporting on his wife, she did not become the focus of coverage of Donald Trump and his campaign. Donald Trump himself was not innately tied to his wife in his coverage in the media, unlike Hillary Clinton who seemed to be inescapably connected to her husband and his legacy.
Both candidates also received their fair share of media coverage regarding his or her appearance. The media focused on Trump’s hair and skin. Hillary Clinton was accused of not wearing enough makeup, not smiling enough, or even wearing outfits that were considered too expensive. Both candidates were not free from attacks on their appearance but it is evident that Clinton received more of the media’s scrutiny regarding her physical appearance.
In a study conducted by Danny Hayes and Jennifer Lawless, the researchers set out to determine how a candidate’s appearance affects the outcome of an election and if this influence is dependent on the candidate’s gender. Contrary to what many might believe, Hayes and Lawless’ study ultimately concluded that both men and women received equally negative media coverage regarding their appearance. Subsequently, the researchers found that only negative coverage of a candidate’s appearance would have an effect on the outcome of an election; positive and neutral commentary on a candidate’s appearance had virtually no effect on election outcomes. An interesting conclusion from Hayes and Lawless’ study is that although people can judge a candidate based on pictures they see of him or her, they are most likely to formulate an opinion about the candidate and his or her appearance based on the way the reporter described the candidate. This fact alone shows the tremendous impact that the media has on the views and opinions of the American electorate.  The coverage of Hillary Clinton and Donald Trump during the 2016 presidential election essentially falls in line with the findings of Hayes and Lawless. Both candidates were subject to comments about their appearance, which was mostly negative.
The 2016 presidential election offered new insights regarding the media coverage of female politicians compared to males. This year’s presidential candidates were both flawed and were not free from controversy. However, the media did not report on these issues the same way. Trump’s scandals were pushed aside and Clinton’s were constantly brought to the forefront of media coverage. One of the most distinct features of media coverage was Clinton in relation to her husband. The media has yet to fully see Clinton as her own person, separate from her husband and his accomplishments and mistakes. This illustrates how gendered the media coverage can be, even in 2016.