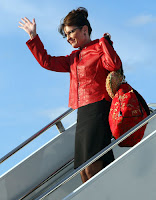 As the first Alaskan and the second woman to run on a major U.S. party ticket, Sarah Palin has made many first strides in politics. Palin took the political world by storm in what appeared to be overnight breakthrough. She was relatively unheard of until she was chosen to be the running mate for John McCain in the summer of 2008. While Palin had run for several other political offices prior to this nomination, her run for Vice President is her most covered and analyzed campaign. While most of her campaign efforts have been typical to that of either gender, Palin did pursue a distinct folksy, suburban mom image for her campaign for vice president.

Similar to any candidate, no issue was considered outside of Palin’s prevue of discussion.  She commented on issues from both the typical “masculine” and “feminine” spectrum. She openly spoke out in defense of Creationism and was strongly Pro-life, which could both be interpreted as “woman’s issues” as they are social issues. However, she is also out-spoken on gun control and foreign policy, as she an avid member of the National Rifle Association and considers herself knowledgeable in foreign relations. This tactic of speaking on issues across in the board in her campaigning can be seen as a typical requirement for any candidate, regardless of gender. It was not until after her unsuccessful vice presidential bid that she began her “Pink Elephant Movement”, in which she purposefully supported conservative female candidates up for election.

Palin created a strong, public image for herself that was particularly feminine in design, which differs greatly from comparable male candidates. Instead of dressing in the typical masculine power suits of most female candidates, Palin played up her feminine image. She wore red leather jackets and suits tailored to her figure. When the media lashed out at the Republican Party for spending $150,000 on her clothing, Palin called it a “double standard”, saying "I think Hillary Clinton was held to a different standard in her primary race.” Comments such as these highlighted her roles as a female candidate  andas the first woman to run on a GOP ticket.
Palin also wanted voters to see the “folksy image Palin has crafted as a typical, suburban mom” (Associated Press). She was not ashamed of her roles as wife and mother, and she played up her image particularly as a hockey mom. She posed the question, “What’s the difference between a hockey mom and a pit bull?” With ‘lipstick’ as the answer, she utilized Republican motherhood well in her campaign. Her family appeared with her constantly, and she played up the idea that she was tough and defensive as a mother. By strongly addressing the issues of her motherhood, she took a strong stance away from most male politicians.

While positive familial ties are generally played up in a campaign, many researchers argue that women fair worse politically when they have children at home and run for political office. This was particularly true of Palin’s campaign, as her seventeen-year-old unmarried daughter Bristol was pregnant. As a strong conservative candidate, Palin received a lot of backlash for this particular scandal. Individuals across the spectrum argued that Palin should not run, given the tough situations her family was facing. A Unitarian Minister named Debra Haffner commented, “The mom part of me says how did this woman expect to run for vice president with a 4-month-old baby with a disability and a 17-year-old about to have a baby of her own?” (Abcarian). Criticisms like these came from various sources, indicating that her initial push to play up her femininity and motherhood may not have been wise for her campaign. Palin had also told reporters in 2004 that “she decided not to run for the U.S. Senate because her teenage son opposed it. ‘How could I be the team mom if I was a U.S. senator?’ she asked” (Abcarian). Many pundits asked the question: Why then but not now? Unfortunately the U.S. Political machine does not seem to favor political women who are also concurrent mothers, which is why many past women have not played their families up as much as Palin chose to do. Palin did not back down from this part of her life, however. She consciously chose to utilize her motherhood as a political strategy, and it may not have been a successful political tool.

In keeping with her Alaskan roots, Palin used a colloquial, conversational tone in many of her speeches. This helped keep up her “folksy” characteristics, and it was well received by supporters. They appreciated her ability to sit down and drink a six pack with Joe the Plummer. However, it appeared that she was not extremely prepared for the national political scene on an intellectual level. Differing greatly from male and female candidates alike, the McCain campaign only allowed her to have three televised interviews with large media outlets prior to the Vice Presidential debate. She received an outpouring of criticism after her interview with Katie Couric, in which she claimed Alaska’s proximity to Russia made her an expert in foreign policy and could not identify a major Supreme Court case that she saw as monumental. At first her common woman persona appeared to work well in her reception, but when she required three days of intense preparation prior to the Vice presidential debate, critics appeared on the Left and Right. They argued she may not be ready for the position, particularly as she was plucked from obscurity. The campaign tactic of not allowing her to be interviewed has been pointed out as one of the large mistakes of the McCain/Palin Campaign.
Palin’s initial decisions to play up her femininity, motherhood, and folksy charm took a sharp turn from the comparable campaigns of male candidates. Joe Biden was the exact opposite of Palin at the time: masculine, father on the side, and well-educated on the issues. Her campaign choices served as a way of making her distinctive and impressionable. And it did have lasting effects. She was chosen to be one of world’s 100 Most Influential People by Time Magazine. Her unique campaign style certainly created a public image for her, but it was not the wisest choice in running for vice president. Right before the election, Palin received “the lowest vote of confidence in a running mate since the elder George Bush chose then-Indiana senator Dan Quayle to join his ticket in 1988” (Page). The American people on the average did not feel she was ready to be a part of the White House. Palin may have come on too strong in with her folksy, suburban mom image, and ultimately, her campaign decisions hurt her chances in the election.