The Difference Between Men and Women's Tinderella Stories

We have seen multiple examples in our class about how women and men are treated differently in public settings, such in chosen careers, politics, school settings, and so on. These public settings can branch out into social media as well such as with Facebook, Twitter, Instagram, and even dating websites and apps such as . . . Tinder.

For those of you unfamiliar with the ways of Tinder, I will get a brief explanation.

Tinder is a dating app. It shows only your first name, 6 pictures of your choosing, and a brief bio. You then go through the gender of your choosing and look at their pictures and brief bio. From this, you can either swipe right, meaning "like" (like you're attracted to them) or left, meaning "nope." When you "like" a persons picture who "liked" your picture, you get a notification, and you two can start chatting over said app.

To get a hands-on experience of the difference between men and women's experience on Tinder, I myself set up a Tinder account. 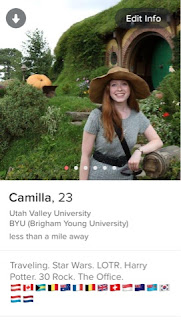 I then created a fake email called "tinderxperiment" and created a fake Facebook account for a male. I then randomly clicked people's Facebook profiles until I stumbled across a normal looking and generally attractive male that I didn't have any connections with and who lived in Canada as opposed to Utah.

Ladies and gentlemen, let me introduce you to my new friend Canadian Kyle! 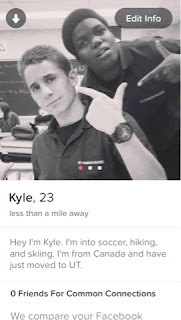 Yes, my friends. Evidently I stole Kyle's identity by grabbing his name, location, and three pictures of him from his Facebook page. If you know him, tell him this account was deleted promptly after finishing this assignment.

Don't try this at home. I'm pretty sure this act ISN'T illegal cause there's no set law against it. I'm just reassuring all you professors out there reading this right now. I follow the law.

My specific hypothesis was that men would initiate the conversation more than women.

However, I was also curious to see the general differences between men and women's profile.

After creating Canadian Kyle's account, I began to swipe right (or "like") on everyone both under his and my account. Tinder gives you a limit of about 100 right swipes before it cuts you off of right swiping for twelve hours. I did this for three days, so on average I did about 300 swipes in this experiment.

Almost right away I began to notice some immediate differences:

About 55 percent of the guys I swiped right on matched with me, while under Canadian Kyle's account, I matched with only about 12 percent of the women I swiped right on.
Along with these numbers, I would match with guys MINUTES after swiping right on them. Poor Canadian Kyle, however, had to wait a good number of hours before even getting a match.
(I don't attribute this to my good looks. And I will show evidence later that backs me up on that statement.)

While under Canadian Kyle's account, I saw about three scam profiles for every 100 swaps. Under my profile? I got one scam. And it was this little guy: 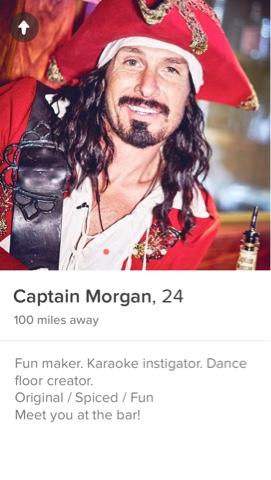 At least I'm assuming he was a scam. I mean, I don't know. There could be a pirate running around out there.

The main differences in the women vs. men's accounts that I saw were:

Women's accounts:
-Generally speaking, the woman's first photo would always be a selfie with some sort of filter on it. And a lot had LAYERED on lipstick for the first photo.
-Most women had at least one photo showing off their body, particularly their breasts - although hips, butt, legs, and curves were not exempt from this list either.
-So. Many. Duckfaces.
- Most had one picture showing them doing some sort of activity.
-Their bios generally focused on their looks, such as stating their hair color or height, (though I don't know why they felt the need to emphasize hair color. We could clearly see it in the picture.) and what they expected out of tinder (long term relationships, friends to hang out with, dancing partner, things that would break the BYU honor code, etc).

Men's accounts:
-Almost every initial photo was of the guy doing some sort of activity; hiking, skiing, playing guitar, surfing, some exotic location they had traveled to, selfie on the beach that showed more of his face than the beach, etc.
-Nearly every profile featured at least one picture of him doing something ridiculous, such as him holding mac and cheese, wearing little kids sunglasses, shoving glow sticks under their glasses, holding some sort of animal in some ridiculous way, holding something that had caught on fire, making a jump that is far too dangerous and would make their mothers cringe, and so on.
-Their bios were generally funny along with saying what they wanted out of tinder. Almost all listed their height.

(Sidenote: something I thought was interesting was that I saw more pictures of cars, guns, and motorcycles on women's profiles than I did on men's. I also saw men have more pictures of/with their pets than women did. Did not see that coming.)

I also noticed a good difference in how the men and women would communicate with me.

When I was Canadian Kyle, I only had two women reach out to me. Their approaches were simply "hey" and "hi kyle how has your day been."

The men, however, were a lot more straight forward.

I had about 40% of the men contact me, and their responses varied in very . . . interesting ways.

- I had a couple marriage proposals
- There were a few who said they were way into me
- A good number listed general things they liked about me; smile, hair, and eyes.
- A few just simply messaged me asking me on a date straight away.
- A lot of guys said I was beautiful or pretty or cute
- Thanks to being in conservative, Mormon Utah, I only had 2 guys message me asking me for sex.
- Captain Morgan messaged me saying something like "ahoy" and referring me to his website. But I'm not really counting him. I just thought it was funny.

Right away we can see a few examples of how Tinder shows us some of the expectations and stigmas there are with men and women.

Women show off their body in order to seem attractive and desirable. Their pictures focused more on their looks rather than activities they had participated in. I think this is very present in our society today, as the media, ourselves, and others focus heavily on how women look and what they wear. Thus, in order to seem "desirable," a woman must fit certain physical features.

There are also facts behind why Canadian Kyle got so many fewer matches than I did.

On average, a man swipes right three times as much than a woman does.  With that, women get about 3 times more matches than men, and 14 times more messages than men.

Why do women swipe less than men? Although I couldn't find many stats on it, I talked to some of my friends on tinder and asked their opinion.

Most women said that there was a big safety issue. They wouldn't swipe right on people they found "unsafe" or "creepy." A lot also would only swipe on those who had similar interests as them. Men seemed to be drawn to those who were attractive and seemed fun from their bios. Safety was generally not an issue for them.

The dating game is a simple way to see how men and women portray themselves to others not only through social media and the internet, but also how they portray themselves in real life, too. In every aspect of life we mold and shape ourselves to fit whatever stereotype we have going against us to fit the profile that society believes is "normal" and what will make you attractive.