Just as shocking as the Covid-19 pandemic is the associated economic recession and increased unemployment that has impacted livelihoods around the world. However, not all livelihoods are impacted equally. A series of studies on Covid-19’s effect on gender equality has found that women face a tougher economy than do men.

Why are women more adversely affected by the Covid-19 economic recession?

Two main reasons that women face a tougher Covid-19 economic situation than men are as follows: women tend to cluster in certain occupations that are more heavily impacted by the pandemic, and women are more likely to reduce their hours or leave their jobs due to increased childcare or elderly-care responsibilities.

The sectors in which women tend to work have been most negatively affected by the pandemic. Women hold more than the average share of positions in three of the four most affected industries—accommodations & food service, retail & wholesale trade, and arts, recreation & public administration (Madgavkar et al. 2020).

Furthermore, an estimated 740 million women around the world work in the “informal economy,” which is one of the first sectors to take a hit in times of economic uncertainty. The informal economy entails jobs that are unregulated or unmonitored by governments such as self-employment, jobs paid in cash, or small odd jobs and services. It is an integral sector of developing countries without big businesses. In these developing economies, 70 percent of women’s employment lies in informal work (Morse and Anderson 2020). In fact, 25 percent of self-employed women have lost their jobs, compared to 21 percent of men. This is particularly significant considering that a bulk of women of self-employed (UN Women 2020).

Aside from informal work, women are disproportionately represented in unpaid-care work, including childcare, elderly-care, cooking, and cleaning. As schools have closed and elderly relatives have either gotten sick or left their care homes, women’s domestic-care duties have skyrocketed. A pre-pandemic study by UN Women found that across 16 countries, women spent an average of 26 hours per week looking after children, while men spent an average of 20 hours a week on childcare. Since the start of the pandemic, these numbers have risen by 5.2 hours for women and 3.5 hours for men (Thornton). This shows that more women have to cut time from employment to care for their children at home.

While it is not clear the rate at which elderly-care has increased for women, women pre-pandemic carried out three times the amount of domestic care, including elderly care, than did men (Nesbitt-Ahmed and Subrahmanian 2020). Presumably the amount of elderly care responsibilities shouldered by women has increased during the pandemic. Furthermore, as elderly increase their caution and isolation thanks to Covid-19, the willingness of grandparents to help watch children has declined. A study in Germany found that the share of grandparents providing childcare for the grandchildren declined from 8.3 percent to 1.4 percent since the pandemic started (Dugarova 2020).

As women face greater responsibilities at home, their participation in the workforce declines. This is especially an issue for single mothers who do not have a spouse’s income to support their family through the pandemic. For example, a survey in Kenya and Sierra Leone indicated that female-headed households were more likely to have skipped a meal than male-headed households in 2020 (Levine et al.)

What can be done?

To counteract the effect of Covid-19 on women, the McKinsey Global Institute found that action must be taken now rather than after the pandemic is over. It projected that in a “do nothing” scenario, gender parity in employment would decrease, and the global GDP in 2030 would be $1 trillion below what it would have been if Covid-19 affected male and female employment equally. On the other hand, taking action now would improve gender parity, which would increase the global GDP by $13 trillion by 2030 (Madgavkar et al. 2020). The chart below shows the economic impact of taking action now versus doing nothing. 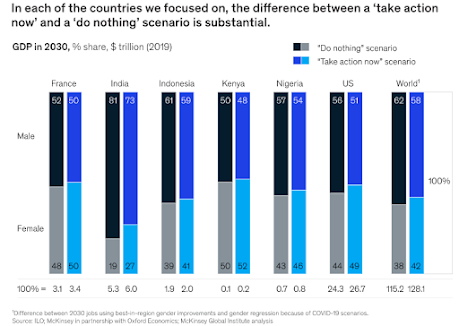 It is evident that acting now would be better for both equality and economies, so what are some of the actions that policymakers and business leaders can take? Some actions include creating employer- or state-funded childcare, allowing flexible work schedules, focusing on stimulating female-owned enterprises, and promoting gender diversity in all industry sectors. Most importantly, governments and businesses can address the deep-seated gender stereotypes and gender roles that prevent women from leaving the home and entering the workplace. No matter the action taken, it is clear that action must be taken now for the sake of both women and the global economy.

Posted by Cristiana Farnsworth at 9:49 PM