Recently, as a country, we have witnessed a rise of hate crimes and racism towards Asian Americans. The rise in hate crimes is based in a misconception that Asian Americans are responsible for the COVID-19 pandemic and that they should “go back to where they come from.” Thousands of videos have been uploaded to the internet, depicting hateful rhetoric, actions, and even violence towards an entire community. These videos show Asian families being spat upon and mocked at restaurants and every day there appears to be a new story. Just this morning, a man kicked and stomped on a 65-year-old Filipino woman near Times Square, yelling, “You don’t belong here.” 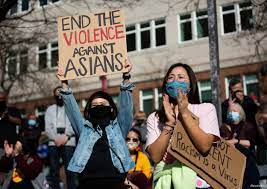 These attacks come on the heels of 2020 when the “Black Lives Matter” protests arose out of outrage for racism towards Black people.

The recent events have sparked concern over racism towards Asian Americans and have left many calling for legal actions and change.

The conversation came to a head when on March 16, 2021, six Asian women were killed at three different massage parlors in Atlanta, Georgia.

Robert Aaron Long, age 21, was a frequent visitor to the massage parlors and he was charged with eight counts of murder and one count of aggravated assault.

He told the police he had a “sexual addiction” and acted in violence against the parlors out of vengeance and said that he wanted to eliminate his “temptation.”  While race was not his stated reasoning, it is hard to ignore the fact that the majority of the victims were Asian. This along with the other issues and violence across the country have put all Asian Americans on edge.

However, Asian American women are especially fearful, and these feelings are better understood when you understand the concept of intersectionality.

Intersectionality is a term that was created by Kimberle Crenshaw who said, “[intersectionality is] basically a lens, a prism, for seeing the way in which various forms of inequality often operate together and exacerbate each other” (Steinmetz).

She coined the term when she was reading about a discrimination lawsuit where Black women were not being hired or moving into leadership at a motor company. The defendants argued that there were women in leadership and people of color being hired on the assembly line. However, all the women in leadership were white and all the people of color were men. This story illustrates how the overlapping marginalization of being Black and a woman led to even more discrimination.

Here the intersectionality at play is between being an Asian American and a woman.

Women are already viewed as submissive, weak, and sexualized objects, however for Asian American women, this stereotype runs even deeper.

Migrants who work at massage parlors and spas are exploited as people with low income and immigrant status, making them extra high risk. “Our country’s wars and military operations through Asia and the Pacific Rim, have, over many years, reinforced sex trades and racialized sexual violence toward Asian women” (Hong). 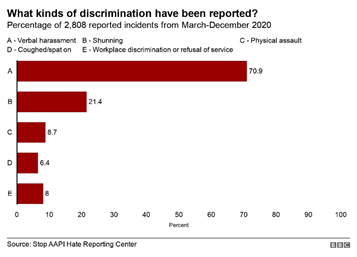 Jennifer Ho, wrote in CNN her experience as an Asian woman in America and said, “To be an Asian woman in America means you can’t just be what you are: a fully enfranchised human being. It means you are a blank screen on which others project their stories, especially, too often, their sexualized fantasies—because U.S. culture has long presented Asian women as sexualized objects for white male enjoyment” (Ho).

This link between this killing of Asian American woman in massage parlors and intersectionality comes from a long history of Asian woman being exploited for sexual servitude in the United States. Being an Asian woman in America and working in a place called “Young Asian Massage”—as a few of the victims were—means that white men assume you are a sex worker when you are in fact a human being who is worthy of respect trying to make an honest living.

Discrimination toward Asian Americans do not appear to be going away any time soon. From verbal harassment, to shunning, physical assault, workplace discrimination, and even gun violence, the trends only appear to being moving up.

It is important to recognize that all racism and discrimination is bad and acknowledge that Asian American women are especially vulnerable right now due to the intersectionality between their race and gender.

While history is not on their side, we have the opportunity to change their future, and in turn ours, for the better.

References for further reading and education:

Hong, Nicole, and Jonah E. Bromwich. "Asian-Americans Are Being Attacked. Why are Hate Crime Charges So Rare?" The New York Times, 30 Mar. 2021.