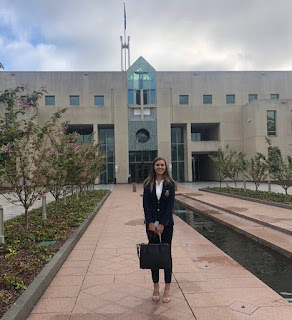 A little over a month ago, two rape allegations were filed against two separate members of Australia’s Liberal Party. The first allegation came when 26-year-old Brittany Higgins (see image) broke her silence by claiming that she had been raped while serving as a Liberal staffer in 2019. Higgins explained that following a date with a colleague she was raped in a parliament office in Canberra.  When Higgins first spoke about the rape to her boss (at the time, the defense minister) she was made to talk in the same office where the rape had occurred. The second allegation appeared shortly after in the form of a letter sent to the Australian Federal Police. This letter was written by a 49-year-old woman who claimed that a current cabinet minister (although he remains anonymous due to Australia’s criminal laws) raped her in 1988 when she was just 16. Shortly after she mailed the letter and filed an official complaint with the police, the woman committed suicide. Friends of this woman, as well as legal experts, called upon Prime Minister Scott Morrison to create an independent commission to study the cabinet official involved. Morrison refused this request and said that the situation should be left up to the police. Only a few days later, the police force with jurisdiction over the allegation released a statement saying that they couldn’t reopen the case due to lack of evidence or a proper witness. As if these allegations weren’t vexing enough, yesterday an anonymous whistleblower came forward with access to a Liberal staffer group message showing video evidence of a male staffer masturbating on a female MP’s desk. In response to both allegations and the releasing of the staffer’s video, a group called March4Justice has emerged. This group has held multiple rallies with thousands of people in attendance while pointing out issues within Australian government and culture surrounding toxic masculinity.  One of the head organizers of this group said, “The root of these issues is that there is clearly a problem with toxic masculinity in parliament and Australia.” Another leader stated, “This could well be construed as Australia’s #MeToo movement. I’m convinced it will bring the type of structural changes we saw around the issues of equality and sexual harassment in the UK and US.” 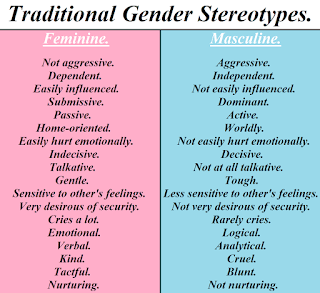 Masculinity can be quite hard to define. Perhaps it can be more effective to make sense of in terms of societal stereotypes. One organization created a simple graphic showing the most common stereotypes among feminine and masculine characteristics (see chart).  It should be carefully noted here that these stereotypes of masculinity can be shifted or altered with changes in the time or placement of a culture. Meaning, as one author put it, “There’s no one set thing that is manhood. What’s masculine in Teheran is different than what’s masculine in Toronto.” As with most societal changes, tension is created when stereotypes are challenged or replaced. That being said, some academics claim that the masculine stereotype has come under more increased challenges during the 21st century than ever before. This rediscovery or redefining of what it means to be masculine has shaped politics, cultures, and countercultures alike. One writer said that while “...this new masculine ideal is an unalloyed improvement on all the earlier masculine ideals...it has sparked a bad-boy protest movement and counterculture.” This same author is among others who view this counterculture to be increasing based on toxic masculinity, which is a term describing when masculine traits are taken to a dangerous extreme. A National Review article described it this way, “Bro culture at its best is privileged; at its worst, it’s predatory...the answer to feminism is and always has been manhood properly defined. It is not – and never will be – the toxic masculinity of the arrogant.” A study done by a renowned psychologist in 2005 showed evidence that toxic masculinity is predatory and a “socially regressive” quality that instills unhealthy dominance in men. Not only this, but another study found that men who claimed masculine traits on a toxic scale specifically targeted women with significantly higher rates of extreme violence. Simply put, the rising counterculture of toxic masculinity has real, and dangerous, consequences for women.

Both allegations of rape and the recently released inappropriate video of a male Labor staffer can be explained in terms of toxic masculinity. The allegations show the dangerous and predatory toll that stereotypically masculine traits, such as dominance, can have on women when they are practiced on a toxic level. Additionally, the video shows the privileged attitude and lack-of-sensitivity that toxic masculinity allows a man (or group of men) to feel. One leader with the March4Justice explained the ramifications that toxic masculinity can have, “But the frightening thing is that these are the role models that our children, young men, and women, are being influenced by.” Explained another way, a stereotype is considered a stereotype because of its perceptional power within society. That is why when any stereotype that encourages increased violence exists, such as toxic masculinity, it must be addressed quickly so that it doesn’t perpetuate for coming generations. For this reason, the situation in Australia was compounded with a potentially dangerous consequences: not only were traits of toxic masculinity shown on a national scale, but they were also shown to have existed for decades within the government. This creates risks not only to those immediately involved in the scandals but also to the Australian government and its future reputation.