No Promised Land of Representation 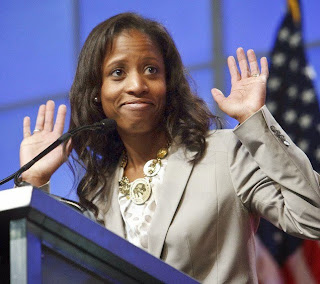 A week ago, amid all the election results and commentary, the state of Utah made news headlines across the country. Surprising many, Utah elected the first republican Black woman to the United States congress, Mia Love. Many celebrated this historic moment, as well as using Love as an example to combat the increasingly common criticisms of lack of diversity in congress and the Republican Party specifically. However, while Love’s historic victory is definitely worthy of celebration, the state of women’s representation in Utahan politics certain is not. In 2012, Wallet Hub ranked Utah as the second worst state in the Nation in terms of women’s equality. (1) An important aspect of this rating was political representation, in which Utah finished only a slightly better 47th. After last week’s election, there will only be 16 women total in the Utah state legislature and Senate, which makes up less than 16% (2).
There are many possible reasons behind this gap in representation. In order to investigate them it is important to outline the existing research about representation and gender, before applying it to Utah. Scholars usually refer to something called the pipeline to political office; which is the path that an individual follows from being a citizen to being an elected representative. The pipeline is depicted below. Theoretically, if there is a gap in representation for women, then they must be getting lost at one or multiple of the stages in the pipeline. The key is answering which one.

Political Scientists have studied this path and discovered important information. For example, Many studies have found that women, when they run, win at the same rate as men, which means that the final step from candidate to representative is not the cause of the gender gap (Lawless and Fox). I will outline the other steps in the pipeline in Utah specifically to identify possible areas where women are being lost.
The first two steps are relatively easy to examine. The 2013 census showed that women make up 49.7% of the population, virtually no difference in numbers entering the pipeline(3). Similarly, formal eligibility, which refers to the legal ability to run for office produces no disadvantage for Utah women. Informal eligibility, however, could be the first place where the gender gap is visible. Informal requirements refer to the expectations that voters and citizens thinking of running have of what it takes to be a candidate, they can include: knowledge of the political system, a high level of education, financial stability, and past experience. In these requirements there is a discrepancy between men and women in Utah. For example, there is a 5% gap in the amount of women who receive bachelors degrees, working Utahan women make 70% of what their male counter-parts make, and there is a 12-point difference in the amount of women in the labor force (3). All of these gaps are larger in Utah than they are nation-wide.
This difference in informal eligibility would have an effect on the next step, which is aspiring to office. It is harder to examine, as it is largely a personal and internal decision. One way we can look at this step in Utah specifically is by the gender differential in occupations that most traditionally lead to political office. Politicians most often come from one of four backgrounds, law, business, academia, or activism. Women in Utah were found to be less likely to be employed in professions requiring higher degrees, as well as management, business/financial, and legal professions than were U.S women (3). This means that compared to other states women in Utah are less likely to be involved in the traditional pathway careers. I will come back to Utah women’s internal decisions to run for office later when I discuss the effect that religion has in Utah.
The lack of women in traditional political careers also affects the next in the process. Going from aspirant to candidate requires recruitment and approval from party-gatekeepers. As these are often men, their networking occurs in traditionally male arenas and they are likely biased towards male candidates. In Utah this is definitely evident. The state is overwhelmingly republican, which means that the Republican Party leadership has the most sway in picking winning candidates. Its leadership includes only one woman, who is the party secretary. The lack of women in decisions making and recruiting positions could contribute to the lack of female candidates in Utah. It is also worth mentioning the effect that the party identification has on this issue. In the 2012 election 72% of Utah voters voted republican, after the elections last week, all of Utah’s representatives in the national government are republican. The strength of the Republican Party in Utah could be part of the reason why Utah has fallen behind in terms of female political representation. Studies have shown that while the Democratic Party has been steadily nominating and electing more women, the Republican Party’s number of female candidates and elected officials has been declining (Carroll and Sanbonmatsu).
So far I have only looked at the traditional explanations for lack of female politicians, however there is also an important Utah specific factor. There cannot be a complete discussion of Utah in comparison with other states that does not mention religion. A Gallup poll in 2012 reported that Utah was the 2nd most religious state in America (4) and the 2010 census showed that over 60% of Utah’s population identifies as Mormon. This means that the LDS church has incredibly strong influence in the state, this influence definitely extends to the political sphere. While, the church strongly encourages members to participate in politics, and Mormon women have a legacy of being politically active, it also reinforces gender roles; which can affect women’s likelihood to self-select for a political career. The LDS handbook on marriage has an entire chapter called “Mothers’ Employment Outside the Home” which encourages women to stay home, and even blames mothers working outside the home for divorce and disintegration of the home. A BYU study of female undergrads found that religious belief and the importance of the single role of motherhood were the most important factors in a women’s decision whether to work outside the home. This means that the strength of the LDS church and its message about gender roles has a strong effect on women’s choice to work. Running for office is also a very visible position in the community; which could make it less desirable for religious Utah women.
The lack of representation of women in government is an issue that has been studied and analyzed by many social scientists, and while there is still not a perfect answer, the picture is clearer. In applying existing research to Utah we can see that most women are lost in the aspirant and candidate steps, this could be due to differences in informal eligibility, perceptions about qualifications, and party leadership. In Utah specifically, religious beliefs about gender roles and mothers’ working outside the home could also have a strong effect. One fact is clear, despite the recent high profile victory of Mia Love; Utah still has a long way to go to in terms of descriptive representation.