In kindergarten, children are asked “What do you want to be when you grow up?” Typical answers include firefighter and doctor for boys, and dancer and teacher for girls. Almost every child changes their mind by the time they graduate high school, often a result of realizing realistic expectations or discovering passions. Typical careers after high school graduation include business, law, medicine, and education. Numerous studies have looked at changing ambitions and how those are often gendered. Let’s take a step back though: where does being a homemaker fit into this mix? While being a full-time homemaker doesn't earn wages, it most certainly can be considered a full-job.

In order to look these career ambitions change from elementary school to after high school, including being a homemaker, I conducted a survey that asked a battery of questions about career ambitions, life goals, and the home-work life balance, along with basic demographics. For a complete topline report, please inquire with the author.

This research has obvious limitations. For one, the sample size is very small before breaking it down for analysis, and once broken down into demographic categories is even smaller. Due to limited resources, the survey was fielded on Facebook. The target group was 18-24 year olds, which made Facebook a good launching pad. Of those that identified their age, 76% are 18-24 year olds. Another limitation is that this sample is heavily composed of active LDS. Combining the age and religiosity limitations, these findings are not generalizable to a general US audience. Rather, these findings and the subsequent remarks can only be generalized to young LDS adults and their career ambitions.

First off, we see that family life is very important to this sample. 97% say that having a successful marriage is very important, and 95% say that being a good parent is very important. On all other questions, we see a more normal bell curve forming, including some people choosing the “don’t know” option. On these two questions however, every respondent had a set position. 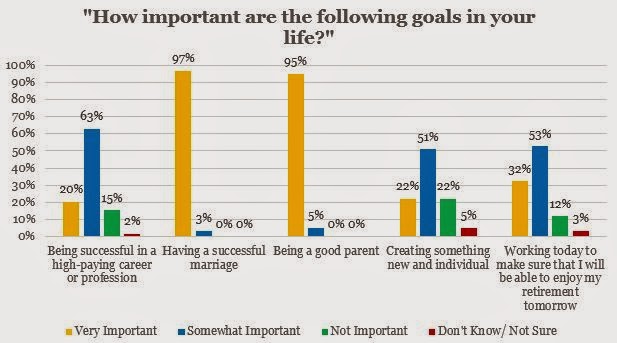 Strong family values are again prevalent when respondents are asked how much they agree or disagree with a battery of statements about career goals and progression. 94% of the sample disagreed with the idea of being single over married to have a more successful career, and 78% of the sample disagreed with the statement claiming that children hindered a successful career. Basically, people are very family-centric. Interestingly, a majority of the sample also claims that they have “clear and firm career goals.” According to this graph, this sample seems to want both a solid family life as well as a good career. Years ago, this balance seemed relatively unachievable, especially for women. However, recent research has shown that more and more couples are trying to create a balance in family life, moving from the typical model of “mother-knows-best” or “the involved dad married to the stressed-out working mom,” instead moving toward the idea of being equals and peers (i). Comparatively, this sample appears to be somewhat aligning with the newer model. 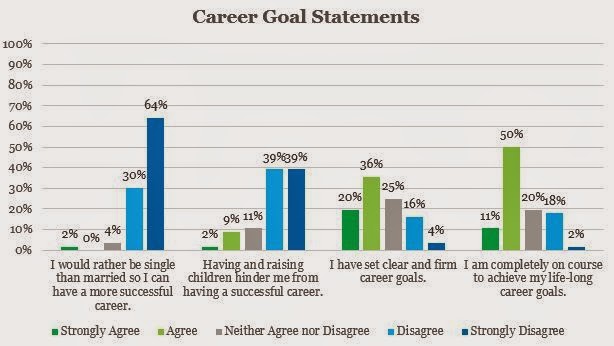 Our data shows that nearly a quarter of the sample identifies “homemaker” as their dream career. This finding seems a bit surprising considering the previous data, but given the sample it does not seem that odd. As mentioned earlier, this sample is heavily LDS (of those who identified with a religion, 87% selected LDS). Mormon doctrine promotes the idea that men be the primary provider for the home and women be the primary homemaker and caretaker of the children (ii). As such, women choosing to be homemakers does not seem so odd in the LDS community. 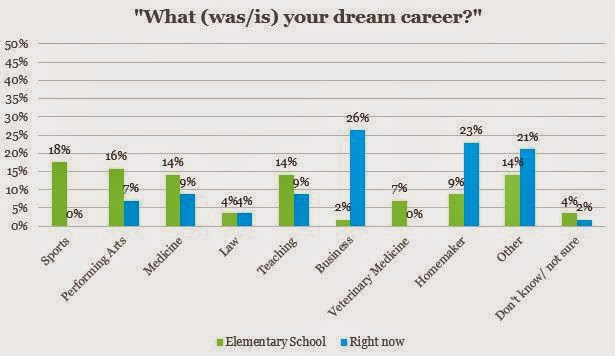 When we break down the dream careers by gender, we see that when asked about “right now,” everyone that selected “Homemaker” was female. Contrastingly, men are much more likely to stick to typical careers. For example, 50% of male respondents say that their dream career falls under “Business.” 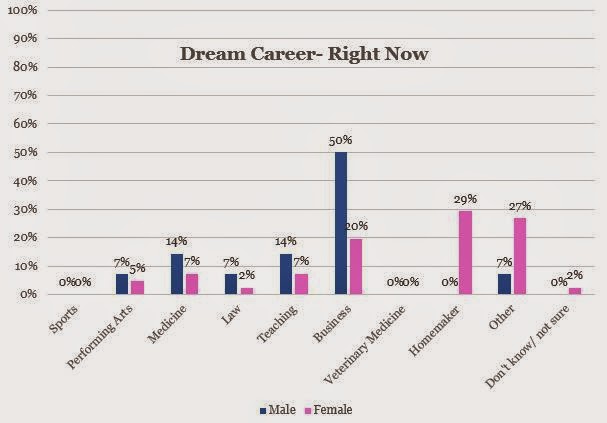 At one point, respondents were asked how much of the time their mother and father were each the designated homemaker in their homes. Contrastingly, respondents were then asked how much they expected them and their spouse to be the designated homemaker in the home. We see that mothers were overwhelmingly the primary caretaker. Of interest is the fact that when asked about their future life, respondents seemed to reflect a more even balance between husband and wife. While the totals are not close to an even 50%, they are moving in that direction. 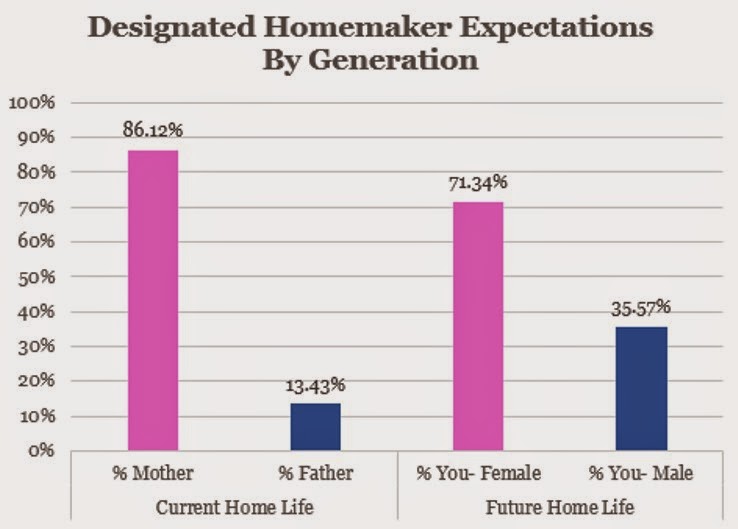 We decided to break down the homemaker expectations by gender to see how they differ. Women actually expect to do more work than their spouse, while men indicate that they are willing to be the designated homemaker for about 1/3 of the time. Simply put, females expect to be the dominate homemaker, but males are more willing than females understand. 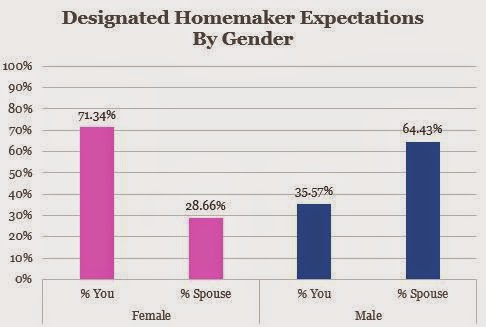 All in all, we still see the typical gender roles of female stay in the home and males in the work place manifested in these findings. While more than 70% of the female sample has a career plan of sorts, nearly 30% plan to be a homemaker. In both questions that asked about time in the home, women expected to be in the home more, but males also expect to be there some, and more so than past generations.

Having two working parents is not so odd anymore, and couples balancing children and work is not so odd either. However, women who do choose to stay home are becoming increasingly accused of “opting out” of a bigger career, or “settling” for their children instead of pursuing a career. A mother’s choice to work or not is a very personal choice, and more often than not there is not a choice in order to provide for the family. As such, women who are choosing to stay at home are seen as less determined than those who are in the work force, and from personal experience alone I can say that that is not the case. To alter this thought process, I propose another solution that starts from the bottom: what if we were to let kindergarten children choose “homemaker” as their chosen career? I wonder if there would be less scrutiny on those who do choose to stay home, since it would be treated like any other full-time career. Soon, our list may be expanded to include not just firefighter and dancer, but homemaker as well.