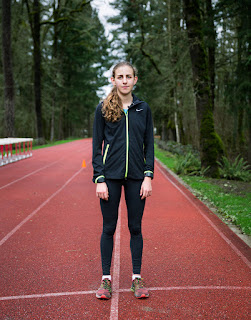 Mary Cain was an Olympic-qualified runner at age seventeen. In 2013, she accomplished her all-time dream of working for Nike’s Oregon Project, the world’s best track and field team. Alberto Salazar—the head coach—was Cain’s idol and role model. He became her personal trainer and she did everything within her power to follow his instructions and make him proud. At the beginning of her training, Cain felt like she had reached the climax of her career. After a short six years on the team, however, this athletic prodigy faced devastating effects when forced to follow Salazar’s increasingly strict body size requirements. In order to retain her standing on the team, she was relentlessly pressured to get “thinner and thinner and thinner.” After multiple years of this rigorous training, which was often based on a male development timeline, her body reached critical condition, coming close to developing osteoporosis and infertility. After these debilitating consequences (and doping charges held against Salazar), she realized that she had to publicize her experiences with the team. Shortly after speaking out, the Oregon Project was dissolved, and Nike underwent extensive investigations regarding the treatment of all their athletes.
Cain’s abhorrent experience is unfortunately quite common. Also referenced in the story was the experience of Gracie Gold, an Olympic figure skater. Similar to Cain, her mental health dropped to the point of suicide due to the inhumane size demands placed upon her. Because she felt like her self-worth was attached to meeting these expectations, she developed suicidal levels of depression. Fortunately, she also spoke out before it was too late. These stories reflect a type of pressure that permeates athletic sports and many facets of the public sphere: gender socialization.
(https://www.nytimes.com/2019/11/07/opinion/nike-running-mary-cain.html?action=click&module=Opinion&pgtype=Homepage)

What is gender socialization?
The concept of gender socialization is when masculinity and femininity are defined under certain terms with two key players: agents and targets. The agents are those actively or passively informing society about what it means to be masculine or feminine. Targets are the recipients of these definitions who are expected to conform to them. In the case of Cain, Salazar and Nike were active agents deliberately pushing her (the target) to get thinner and thinner to achieve their definition of what a feminine athlete should look like. Another athlete, Olympic distance runner Kara Goucher, expressed that “after being cooked meager meals by an assistant coach, she often had to eat more in the privacy of her condo room.” These athletes did their best to conform to the expected body mass, but it was physically unattainable. For Cain, this meant losing recognition from Salazar and her status within the Oregon Project. These women exemplify how strict adherence to gender socialization standards can be harmful to realize.
Standards like these develop from more general gender stereotypes. From Cain and Gold’s stories, one of these stereotypes for women is extreme thinness. The video Tough Guise addresses the limiting set of stereotypes that males are socially compelled to conform to or be ostracized. Characteristics include, but are not limited to, aggression, intimidation, physicality, power, muscularity, and athleticism. These gender constructs explain in part the rationale behind Salazar and Nike’s actions toward their athletes.

What are “real” sex differences?
While some of these gender stereotypes are created through agents of socialization, others stem from actual differences between males and females, as explained in the work of Wade and Feree. “Real” differences are those that can be measured cross-culturally and biologically. The number of “real” biological differences between men and women are few, but they can have detrimental consequences if intentionally ignored. In the example of Cain and Gold, “women and girls are being forced to meet athletic standards that are based on how men and boys develop.” The toxic implications for women include decreased bone density, poor mental health, loss of menstrual period, increased risk of osteoporosis, and even suicidality. This occurs because Cain and other female athletes cannot physically fit this impractical mold without serious health consequences. It is not just a matter of intense training and dedicated effort; there are legitimate physical differences that make standards like those set by Salazar impossible and destructive for ambitious athletes.

Consequences of ignoring “real” sex differences can result in experiences like those of Cain and Gold. They push themselves to unnatural levels that are physically unrealistic to meet and damage their bodies in doing so. Holding to such expectations can be destructive for all athletes, and by extension, members of society when it causes agents to disregard “real” sex differences.
Posted by Lawrence Tuttle at 2:38 PM