For centuries, a Confucian culture of male dominance has shaped gender roles in China, Hong Kong, and Taiwan. During the 20th century, however, these Chinese territories experienced starkly different political developments. Now China is an authoritarian country where the Communist Party has a monopoly on power. Moreover, Hong Kong is an autonomous territory that is administered by Beijing, but enjoys some political freedom. Finally, Taiwan is a healthy democracy that is, in practice, independent from the Mainland.

On the surface, women’s political participation in these societies is highly varied. First, China’s top decision-making body, the Politburo Standing Committee, has seven male members and has never admitted a female. Second, six out of ten political parties with the most seats in Hong Kong’s parliament are chaired by women. Third, Taiwan’s people elected their first female president this year, after a presidential race that was dominated by two women. Indeed, it seems like Beijing still embraces Confucius’ belief that the ideal state is ruled by wise men. In contrast, female politicians in Hong Kong are on equal footing with men, and gender is not even a factor in Taiwan’s politics.

After reviewing existing literature, however, I learned that women actively facilitated political changes in all three territories. Mao Zedong, who led the Communist Party when it established the People’s Republic of China, famously said that “women hold up half the sky.” He advocated gender equality and honored women who were loyal to the Party. The defeated Kuomintang Party left the Mainland and set up their government on Taiwan in 1949. This party enshrined a reserved seats system in Taiwan’s Constitution, requiring that parties slate female candidates or risk losing seats in the legislature. When China absorbed Hong Kong in 1997, women comprised 12% of Hong Kong’s Legislative Council. Today, women make up 19% of the legislative body.

My research aims to determine whether diverse political institutions can affect long-term attitudes about the roles of women in politics and society. I focus on China, Hong Kong, and Taiwan because these territories share the same history, but differ in their current systems of government. My theory is that as governments allow women to participate in the political process, women’s expectations for their place in the workforce will expand. In other words, an increase in female political engagement should lead women to perceive a greater professional role for themselves.

To test my theory, I analyzed survey responses gathered by a reputable international organization called the World Values Survey (WVS) from China in 2007 and 2012, Hong Kong in 2005 and 2013, and Taiwan in 2006 and 2012. WVS partners with local researchers every few years to interview a sample of at least 1,000 people in each territory. Each sample is drawn randomly so that the views expressed accurately reflect the values of the entire population. I measured the independent variable, or causal factor, with responses that women in China, Hong Kong, and Taiwan gave to questions about their level of political engagement. The dependent variable, or outcome of interest, was how these same women perceived their role in the labor force. I created graphs to show how women’s responses in each territory changed over time, and discovered significant results, leading me to draw wider conclusions and predict future trends. 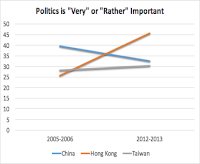 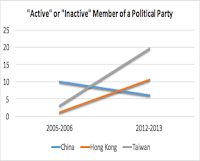 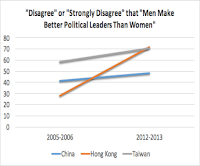 I found that women in Hong Kong and Taiwan are more engaged in politics than women in China. The percentage of Hong Kong’s women who said that politics is a “very important” or “rather important” part of their lives jumped from 25.8% in 2005 to 45.7% in 2013. Likewise, many more Taiwanese women report membership in a political party, bringing the figure from 3.0% in 2006 to 19.6% in 2012. Contrarily, figures for Chinese women declined on both measures. Nevertheless, women from all three territories increasingly disagree that men make better political leaders than women. 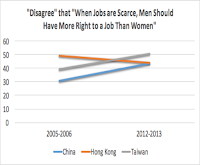 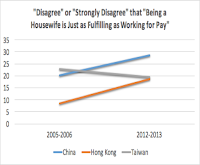 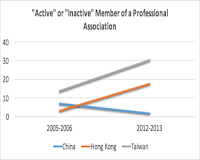 I found that overall, women in China, Hong Kong, and Taiwan not only feel they have a right to work, but also desire to work for pay. This trend is consistent for women in China, but mixed for women in Hong Kong in Taiwan. Meanwhile, the growth rate for women’s participation in professional associations is equally positive for Hong Konger and Taiwanese women, but negative for Chinese women.

In conclusion, women in China are gradually accepting the idea of female politicians and expressing a desire to work. Chinese women can most effectively expand their roles in politics and society by engaging with the Communist Party and participating in Party-approved women’s organizations, such as the All-China Women’s Federation. After only a few years, Hong Kong’s women report much greater participation in government and labor. The best way to continue this trend is to institutionalize women’s engagement so that lingering Confucian norms do not deter women’s involvement in the public sphere. Finally, women in Taiwan are earning top positions in government. Similarly, their membership in professional associations is growing and their support for women’s employment is increasing. The success of Taiwan’s women stems from a political system that has mandated female representation for decades.

Although my findings are specific to Chinese territories, they are useful for further research and wider application. For example, authoritarian or democratic regimes can experiment with institutions to promote women’s political and professional participation. Additionally, women’s rights groups can learn how to expand gender roles in traditionally conservative societies.
Posted by Meihua Roy at 7:23 PM