Beyond Bundesmutti: Gender and Political Participation in Reunified Germany 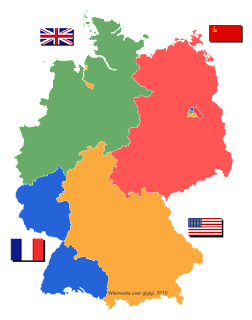 Since state ideology certainly seems to have an effect on women's employment rates and attitudes toward work in the former Germanies, I wondered what effect the differing ideologies might have had on women's political participation. On the surface, it seemed like East Germany's official emphasis on women's emancipation might have left a legacy of high political participation by women–after all, Putin's main contender for the title of "Most Powerful Person in Europe" is an East German woman. However, one highly visible success story is not enough to prove a point. To get a better idea of variations in women's political participation by region, I decided to examine voting rates and the rate at which women were directly elected to the Bundestag (legislature). This meant that I could analyze both everyday participation and elite participation, which would provide a better picture of what was going on. 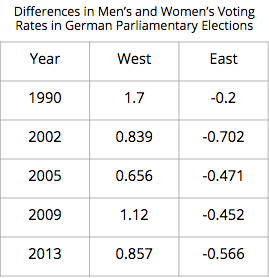 For my analysis of voter participation, I used voter demographics data provided by the German government. Although I wanted to focus on the Bundestag elections from 1990 (right after reunification) to 2013, the data from the 1994 and 1998 elections were mysteriously absent. This forced me to omit those years. In the years that data was available for, the data was already broken down by gender and region, and gave percent participation for each gender in the East and the West. I calculated the difference between men's percent participation and women's percent participation in each of these regions. It was important to do this by region because voting rates are lower overall in former East Germany. The chart above shows the differences (by percent) between the genders. A positive number indicates that the percentage of men voting was higher than the percentage of women, while a negative number indicates the opposite. Although the difference doesn't look that big, it is worth noting that men were consistently voting slightly more than women in the West, while women were consistently voting slightly more than men in the East. A t-test determined that there was a statistically significant difference.

The implications of this are really interesting to consider. Voter participation is lower in the East, but women participate a little more relative to men in the East than they do in the West. They still have lower participation rates than their counterparts in the West, but they seem to be the more committed group of voters in the East. Although four disillusioning decades in a single-party state is almost definitely a contributing factor to the East's lower voting rates, can the DDR also be credited with women's slightly higher participation rates? Variables like religion (atheism is especially prevalent in the East) are probably playing a role, but the effect that the DDR had on women's voting rates merits further study.

Overall, I felt my study mostly taught me how much is still unknown. There appear to be at least some gender differences between East and West Germany, but the complexity of the other issues surrounding German reunification and the relative newness of Germany as a unified country make it difficult to determine how significant and deeply-rooted these differences truly are.
Posted by Sarah at 9:40 PM