As of March 30, 2021, more than 10,000 young people in Britain have contributed stories to a blog called “Everyone’s Invited” to share their experiences of inappropriate sexist comments and even instances of sexual assault. The host of the blog, Soma Sara, created the public forum in an effort to begin a conversation about the pervasive rape culture that she saw in her own social circles at a prestigious London boarding school. Scrolling through the myriad of stories and experiences of young adults that have been sexually assaulted or treated inappropriately due to their sex begs the question: Where did our societies go wrong?

In response to this question, Sara claimed that there is a type of behavior being normalized in our societies, “like groping at a Christmas party, or non-consensual sharing of intimate photos.” The normalization of this kind of behavior opens a gateway for more serious and even criminal acts such as sexual assault and rape. Indeed, those types of stories have made their way onto “Everyone’s Invited,” and London’s Metropolitan Police, deeply concerned by what they learned was happening, have encouraged victims to report the potential crimes.

A senior police officer in London’s Metropolitan Police Force put a name to the movement that is occurring in Britain. A #MeToo movement has begun sweeping through schools, reminiscent of the 2017 movement which gained great momentum after victims broke the silence of incidents where powerful politicians, celebrities, and corporate executives were accused of committing acts of sexual harassment, assault, and rape.

A day prior to the publication of the article about Sara’s public forum, a score of Springville High students in Springville, UT staged a walkout to bring attention to the allegations against a teacher. Several students have complained that the teacher has made inappropriate comments and has had inappropriate contact with students. The problem is rampant; “It’s everywhere,” claimed the senior officer investigating the allegations in London. 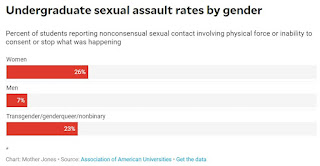 A common trend seen in allegations of sexual assault across colleges and universities is that sexual misconduct is most often committed by males against females. In the United States, 90 percent of sexual violence against women is perpetrated by men. A survey of 33 of the largest universities in the US estimated that 1 in 4 undergraduate women have experienced sexual assault while they were students. This is not to say that sexual harassment, assault, and abuse has not occurred in boy-on-boy, girl-on-girl, and girl-on-boy situations, but the gender inequality in reported incidents represents a severe societal malady. Why are females often the target of such misconduct?

There is damning evidence that a culture of misogyny is to blame for the gender inequality in incidents of sexual misconduct. With most perpetrators of sexual misconduct being men and most victims being women, one must examine the effects that masculinity has on the allegations of sexual misconduct. Indeed, cries of “toxic masculinity” in our culture have encouraged classrooms and workplaces all over the United Stated to reevaluate what it means to be masculine. While values of strength and dominance are not toxic in and of themselves, they can become toxic when applied to a context where a man feels that it is normal to exercise that kind of strength and dominance over a woman.

The idea of masculinity, or the ideals of being a man, have taught men to see themselves as part of a group with a specific kind of culture. While there are many men who do not ever engage in sexual misconduct towards a female or anyone else, there are many others who commit heinous acts like sexual assault and rape because it is an aspect of the typical male expectation to be controlling and, often, violent. There exists a stigma in our societies and cultures that acting with care and gentleness toward women is seen as weakness in a male. Social pressure for men to conform to the ideals of masculinity like strength and dominance has consequently led to the expression of violence and aggression toward females who are often construed as the secondary sex.

The first step to correcting the sexual conduct rampant in our societies is by speaking out. The 2017 #MeToo movement and the exploding “Everyone’s Invited” blog have created a space where victims of sexual misconduct can share experiences and offer support. The existence of these spaces and the increasing movements are serving to eliminate hermeneutical injustice, or the lack of interpretation that socially powerless groups are faced with. In this case, the hermeneutically marginalized are female victims of sexual assault, and through these platforms, they are finding ways to understand and explain their own experiences with sexual assault by being able to share that same experience with others. The value in women being able to share the concept of sexual assault with other women can help to empower, educate, and comfort others who have undergone these traumatic experiences. By defining sexual assault and realizing that it is a much more common incident among young people today, we can—as a society—identify sexual misconduct when it occurs and seek to stop it from happening. This will ultimately come by supporting victims and trying to change the culture of masculinity that has normalized sexual misconduct and inappropriate behavior.

Posted by Miranda Olson at 9:04 PM