Toys will be toys?

As my cousins run around the house play-fighting with light-sabers and Spider-Man wrist bands, my aunt looks at us, rolls her eyes and laughs all at once. She watches her daughter for another minute before she says, “Lily loves coming over here because all the boys have cool toys.”

Later that year, Lily showed up on our doorstep on Halloween in a Spider-Man costume and her mom let out a sigh, “Ah, I couldn’t persuade her out of this costume. Oh well.”

At the time Lily was still a toddler, but she is now a first-grader. Her personality is outgoing and energetic as ever, but over the years she’s strayed away from playing with the light-sabers and Spider-Man costumes in lieu of hot pink, stuffed unicorns and Barbie dolls. So what could have changed?

Studies have shown that children do not understand the consistency of gender until around the age of seven (Lily’s age). This means that until around this age children realize that she or he will always be fall under the category of boy or girl. Once this happens children begin to more closely observe same-sex models to interpret and display the characteristics and behaviors of a girl or a boy. Family is one of the main modeling sources, but television and shows can be just as influential. Yet, what are often forgotten about are the commercials and ads that play in between breaks.

Walk into any Wal-Mart, Target, Toys-R-Us and you will see a distinct separation of colors and in the aisles alone. Now if you walk through those aisles you’ll see an even clearer distinction as to what types of toys are meant for girls and what toys are meant for boys. The “girl” toys consist of beauty salons, baby dolls, and mini house cleaning supplies, while “boy” toys are cars, swords, and construction-focused.

In her research Elizabeth Sweet examined Sears catalogues from 1975 and discovered that in recent years, advertisement for children’s toys has become more gendered over time. In fact, few toys were clearly—or subtly—defined as girl or boy toys. They were just toys.

It may be that parents socialize children into gender norms by investing in these toys, but it doesn’t begin with parents. It begins with the advertisement industry. Sweet points to a study published in 1993 revealing that parents bought more gender-typed toys when their children asked for them. Whereas when parents chose the toys on their own, the toys were less likely to be so highly gendered.

If children are demanding and parents are supplying who is influencing? Let’s go back to commercials and ads. The following examples are just a few of the ways children’s toys are advertised to fit gendered roles. 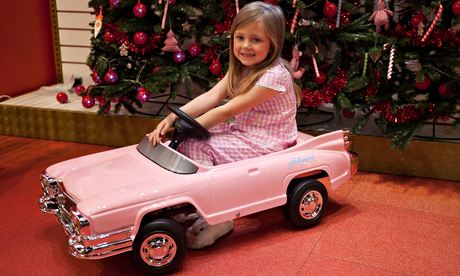 Toy companies may argue that gendered-toys is are a supply to a pre-existing demand—that children already want these types of toys. However, if children don't develop views of gender consistency until the age of seven, what factors influence this? It's a complicated issue that differs based on child, parent, and media exposure, but nevertheless worth considering.

Switzerland recently made an effort to present a more gender-neutral toys catalog and the response has been mixed. Only through time will we ultimately see what difference toy advertisement can have on children's gender socialization.